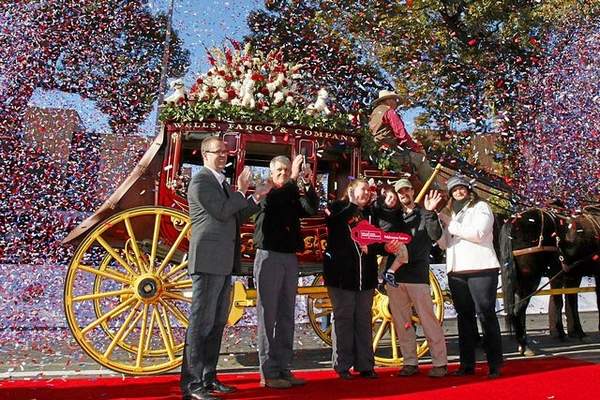 The response of excitement and shock was quickly overtaken by a posture of gratitude and acceptance – all played out in front of a huge Rose Parade crowd at the corner of Orange Grove and Colorado Blvd. along with an estimated 40 million television viewers in the United States alone.

“It was a privilege for me to represent Wells Fargo and present Sgt. Perrotte and his wife Kayla with a new home in Hampton Virginia,” Sloan told The Tribune, adding that his firm has donated more than two hundred homes to veterans since the program was implemented in 2013.

Wild cheers and showers of confetti greeted Sloan’s announcement, which took place in front of one of Wells Fargo’s trademark stagecoaches.

Sloan is former President of San Marino National Little League and in 2011 was named this newspaper’s ‘Citizen of the Year’ for his outstanding contributions to the San Marino Community.

“As we start off the New Year we could not be more excited than to honor Staff Sgt. Perrotte and help him achieve his goal of homeownership with a mortgage-free home donation,” Sloan said during the presentation ceremony. “Along with Military Warriors Support Foundation, we salute Staff Sgt. Perrotte, who bravely served his country, and take pride in being a part of the great tradition of the Rose Parade.”

Wells Fargo has partnered with Military Warriors Support Foundation to implement the program.

“Like many Americans, our heroes have a desire to own a home but with the battle injuries they have, there can be obstacles to making that a reality,” said Lt. Gen. Leroy Sisco, founder and CEO of the Military Warriors Support Foundation. “These homes help to fill a significant need for veteran housing, but it would not be possible without the support of great partners like Wells Fargo. Presenting these homes to veterans lets them know that people care.”

The theme of the January 1, 2015 parade was ‘Inspiring Stories’ and the home donation to Staff Sgt. Perrotte was described as one of the most “inspiring stories of the day.” The Purple Heart recipient, who served two tours of duty in Iraq and one in Afghanistan, will receive a home in Hampton, Virginia, where he and his family plan to settle down to be closer to family and friends.

Since January 2013, Wells Fargo has donated nearly 200 properties valued at more than $30 million, surpassing the commitment it made two years ago.