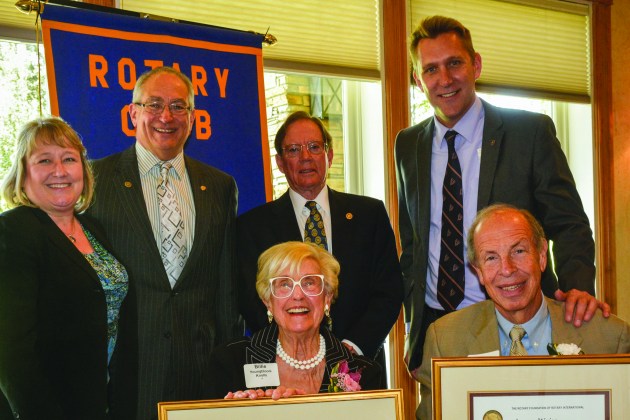 Members call it their ‘signature event,’ and last Thursday afternoon, the Rotary Club of San Marino welcomed two treasured residents into the esteemed realm of Paul Harris Fellows, named in honor of the club’s founder as Billie Youngblood-Knollé and Aaron Weiss were bestowed the honors.

“I was shocked,’” Youngblood-Knollé told this reporter the day before the ceremony, which was held at San Gabriel Country club. “I couldn’t believe it,” genuine surprise registering on her youthful face.

Weiss joins his wife, Valerie – who received her plaque in 2010 – on the list of Fellows. Billie Youngblood-Knollé’s service to San Marino spans nearly six decades and includes a stint at the San Marino Tribune, where she penned a weekly ‘Who’s Who in San Marino’ column.

For the full story and a gallery of photos, see the print edition of the San Marino Tribune, or download the e-edition.