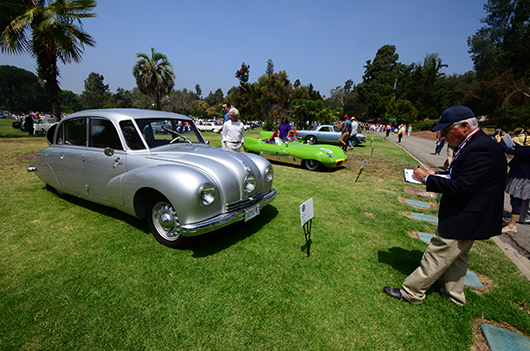 More than 200 classic and collector cars were on display on Sunday, June 14 at the 2015 San Marino Motor Classic at Lacy Park.

“We have about 270 vehicles,” San Marino Motor Classic co-founder and co-chair Aaron Weiss said. “There are many charities that need money and this event raises a lot of it.” Weiss also is an avid car collector and director of the Southern California Region of the Classic Car Club of America.

Beneficiaries of the annual fundraiser are the San Marino Rotary, Pasadena Humane Society & SPCA, and the Petersen Automotive Museum.

“This is our primary fundraising effort for the year,” said Wayne Carter, co-chair of the San Marino Rotary volunteers for the Motor Classic. “This is the fifth year that we’ve been involved. Our share of the net proceeds has gone up significantly since the Motor Classic has grown each year.”

He noted, “all money received by the Rotary is put back into the community in projects both local and international.”

“This is the fifth year that we’ve been involved,” said Ricky Whitman, vice president of community relations at the Pasadena Humane Society & SPCA. “It’s been a wonderful charity for us. It’s a terrific event for the community and a way to make new friends.”

“Since its inception, we’ve had at least one car here every year,” said Dick Messer, retired director of the Petersen Automotive Museum.

“We have four cars here this year. Aaron Weiss is a big supporter of the Petersen Museum.”

For the full story and a gallery of photos, see the print edition of the San Marino Tribune, or download the e-edition.