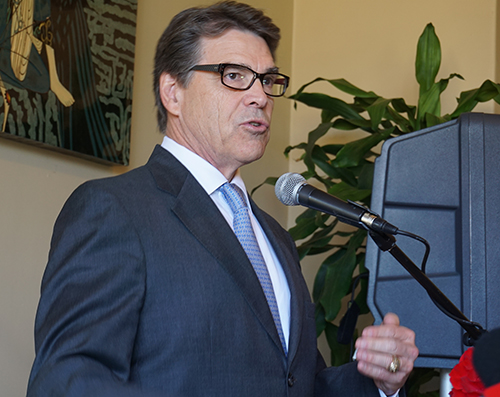 Presidential Candidate Rick Perry visited the San Marino home of Dr. George and Zehra Sun on Wednesday, June 24 and spoke on his ideas of how to strengthen the United States, if elected its next president.

His message was this: “The best days of this country are ahead of us. We’re just a few good decisions and a leadership change away.”

Perry referenced his experience as governor of Texas and the successes made under his leadership. In education, for example, he stated Texas was 27th in the nation for graduation rates in 2003. Ten years later through incentive programs for teachers, Texas was No. 2 in the nation.

“No one has to wonder how I am going to perform,” Perry said stating he has been tested and has a proven track record. Over the years, Perry has dealt with a number of issues including the economy, environment, foreign policy and even a major healthcare crisis, all of which he had “no guidebook” to follow.