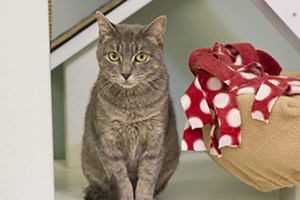 The Pasadena Humane Society & SPCA, along with nearly 50 animal shelters across Southern California, is participating in “Clear the Shelters,” a day-long adoption event spearheaded by NBC4 Southern California and Telemundo 52 Los Angeles. On Saturday, Aug. 15, the adoption fee for all dogs and cats will be reduced to $20 and the shelter will hold extended adoption hours from 9 a.m. to 6 p.m.

“I’m proud that our stations are working with so many local animal shelters throughout the Southland to help rescue thousands of animals,” said NBC4 President and General Manager Steve Carlston. “This is an exciting initiative to support an important community cause and mobilize millions of people to adopt a pet from their neighborhood shelter.”

The first-of-its-kind nationwide pet adoption initiative will take place in 19 markets across the United States and Puerto Rico. The Clear the Shelters effort pairs up 28 local NBC and Telemundo television stations and regional news network necn with more than 300 animal shelters across the country with a goal of finding new homes for thousands of homeless pets.

“Animals have always been an important part of my life. I know well the great contribution their love makes to a family. I’m proud that our stations are working with hundreds of local animal shelters to help save the lives of thousands of deserving animals across the country,” said Valari Staab, President, NBCUniversal Owned Television Stations. “I encourage everyone to join us in this national day of action to help ‘Clear the Shelters’ and give thousands of homeless animals the chance of a new life.”

The Clear the Shelters initiative, which is sponsored nationally by Overstock.com, will feature special shows and programming that will air on local stations before and after the pet adoption drive (check local listings). Each participating local station will also engage local viewers with news and information across various platforms, including on air during local newscasts, online and via social media, to help raise awareness about the actual pet adoption day as well as related issues, like the overpopulation of shelters and the dangers of euthanasia.

The Pasadena Humane Society & SPCA is located at 361 S. Raymond Avenue in Pasadena, California. The event is open to anyone looking to adopt a pet; not just residents of our service cities. Regular adoption policies and screening apply. To expedite the adoption process, download and print an adoption application in advance on our website. If you rent, bring proof you are allowed to have a pet at your residence. Ample parking is available onsite. View all animals at the shelter at pasadenahumane.org/adopt.

The public is encouraged to begin posting photos with their pets on social media using the hashtag #CleartheShelters and #DesocuparAlbergues. Photos will begin posting on photo galleries at www.NBCLA.com and www.Telemundo52.com now through Aug. 15.