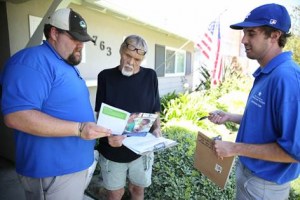 Approximately 3,000 residents in San Marino received a personal visit from California American Water representatives over the course of a week in order to remind customers of the 28 percent water use reduction mandated because of the statewide drought.

California American Water External affairs Manager Brian Barreto said representatives addressed the question of, “Are we reaching that 28 percent goal?” The answer is yes, he said. In fact, there has been a 30 percent reduction in water use.

“That’s great that we’re exceeding the goal,” he said.” However, in the summer months, we need to continue to be conservative.”

“We’re not out of the woods yet,” Barreto added stating they will continue to monitor water usage and work with customers to continue conserving.

The city’s efforts to conserve has already had a major impact on its water bill too. Last year the city’s bill for June was just over $21,000 while this year’s June bill was $8,500, according to the Aug. 13 weekly briefing from City Manager John Schaefer.