Richard, Ivy Sun to be Honorees at Crystal Ball 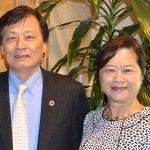 San Marino City Councilman Dr. Richard Sun and his wife Ivy will be honored this year at the 26th Anniversary Crystal Ball hosted by the Methodist Hospital Foundation on Oct. 10 at Pasadena Convention Center.

The couple was humbly surprised by the gesture.

“We were pretty shocked,” Richard said. “I don’t feel I’m qualified. There are other, more deserving people.”

“I was surprised–and honored. I don’t feel I’ve done enough,” Ivy said. “But I am honored.”

Richard joined the Methodist Hospital Foundation Board in 2008 and immediately became an active member of the Crystal Ball committee, co-chairing in 2010 with his good friend and fellow foundation board member Christine Antonovich.

This year’s co-chairs will be Richard “Dick” and Sue Hale, who are long-time Crystal Ball supporters.