Volleyball Victory Is One for the Ages 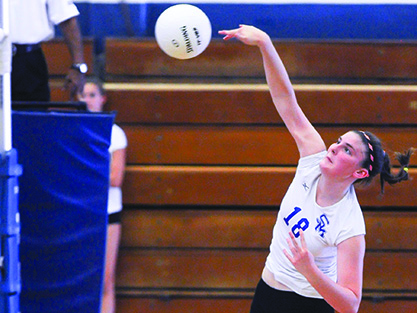 San Marino Ends La Cañada’s 43-Game Dominance Over Lady Titans, A Streak That (Might) Extend As Far Back As 1994

When asked about his team’s win over La Cañada last Tuesday evening, San Marino High School’s girls’ volleyball Coach Hugo Ayala called the Spartans “another team that is in our way.”

When the rookie coach was informed that the win was San Marino’s first over La Cañada since 1994, the magnitude arrived.

“That’s the year I was born,” he said with a tinge of wonderment.

For no reason at all, hundreds of former Lady Titan volleyball players all across the globe felt a little spring in their step at about 5:15 p.m. Pacific Time as 21 years and 42 games of frustration were eased ever so slightly when San Marino completed their 25-17, 25-23, 24-26 and 25-20 victory, improving their Rio Hondo League record to 3-3 while taking an edge over La Cañada for the third and final playoff spot.