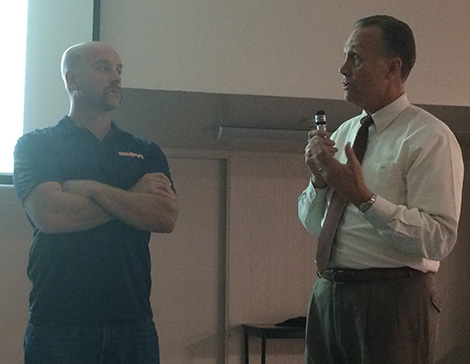 Firefighters filed into the Huntington Middle School cafeteria one after another on Thursday, Oct. 15 to support maintaining four people on a fire engine. The majority of the audience was there to talk about what it would mean for the San Marino Fire Department to operate its engine with only three people, but the Mayor’s Meeting that evening also addressed the public safety tax and the utility user tax.

Some people argue that if the public safety tax, which makes up 19.28 percent of the fire department’s budget, does not pass on Nov. 3, the city would essentially be forced to reduce fire costs. Although the tax money can only go toward paramedic, fire and police protection, San Marino City Manager John Schaefer it is possible the expected $2.9 million could be cut from other departments, if lost.

One person pointed out that the tax expires in June 2016, so it probably wouldn’t cause the city to rush to action anyway. Several community members said they could understand the cuts better if the city’s budget was in the red, and they absolutely needed to make cuts.