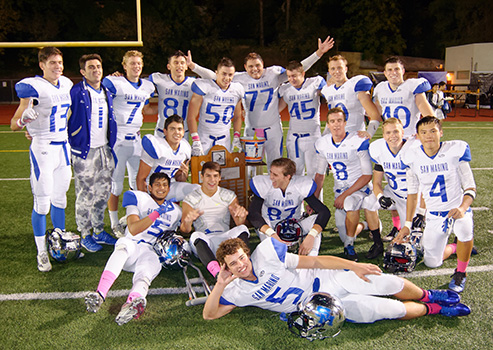 Take two high school football teams, roll in ‘rival,’ add a little ‘undefeated,’ sprinkle on a layer of ‘Homecoming,’ season with ‘controversy’ and what do you get?

It was all there, but now most of it belongs to the Titans as San Marino rolled to a 35-0 victory, claiming the inside track to the Rio Hondo League championship while keeping the Crowley Cup.

The Titans, 8-0, 3-0 in Rio Hondo League action, deviated from their traditional game plan due to a belief that South Pasadena had studied film of previous games to decipher San Marino’s hand signals that send plays to the offense at the line of scrimmage.

“No doubt, they knew what plays we were running,” said San Marino quarterback Carson Glazier. “Their defense was calling out what we were going to do before we snapped the ball.”

Head Coach Mike Hobbie took the drastic steps of actually sending the offense into a huddle and summoned Glazier to the sideline to verbally communicate the next play. The Titans seemed to relish the slower pace, switching to a ground-based attack that saw junior tailback Michael Chan run the ball 31 times for a season-high 153 yards and three touchdowns. The exercise might prove vital as the Titans head to the postseason, when a strong running game just might come in handy. Or maybe even tonight, when La Cañada comes calling at 7 p.m. for the final regular season game at Titan Stadium.