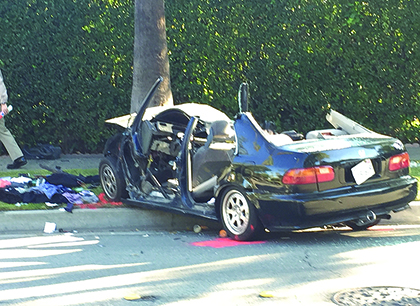 The silence of a tranquil Sunday afternoon was shattered when an automobile traveling at a high rate of speed plowed into a palm tree on the south side of Monterey Road, just west of Oak Knoll in San Marino, injuring both the driver and passenger, both males. The 1999 Honda Civic and its license plate were both stolen, according to Detective Sergeant Timothy Tebbetts of the San Marino Police Department.

The driver, Joseph Brandon Garibay, 20, of Los Angeles, was later booked on charges of felony drunk driving, according to San Marino Police Chief John Incontro, who was on the scene for much of the afternoon as officers investigated the accident scene. Garibay and the passenger, who was not identified by the SMPD, had to be extricated by Alhambra Fire Engine 71, which was first to respond to the scene. Firefighters cut the roof and doors off the black Honda, which had been reported stolen from Temple City on Nov. 18. The license plate was also stolen from a 1999 Honda in La Puente.

Garibay was later released from the hospital and transported to Los Angeles County jail for booking and was jailed on the charge of grand theft auto. Follow up with the hospital listed the passenger in good condition.

“We are still working on the investigation,” said Incontro.