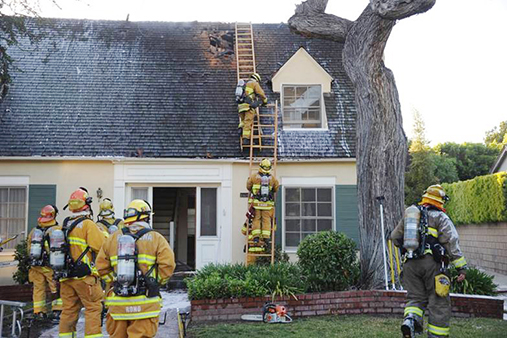 Approximately 33 firefighters responded to a two-story residential structure fire to the rear of 2763 Gainsborough Drive on Tuesday, March 22 at 5:44 p.m. There were no injuries.

The cause of the fire is still under investigation. However, Deputy Fire Chief and Fire Marshal Mark Phillips said it looked like the fire started because of malfunctioning pool equipment.

It immediately spread to four tall cypress trees on the property. Significant winds at the time plus the close proximity of the structures caused the fire to spread to the wood shingle roofing of the garage and home at 2763 Gainsborough Drive.

Although significant progress was being made to stop the fire’s progress, winds moved the embers under the roof, and into the attic. Firefighters took off part of the roof to get to the flames in the attic. Interior fire crews also aggressively attacked the attic fire from the inside of the home and quickly extinguished the fire before it could spread any further, Rueda stated.

“This house could have completely burned to the ground,” he added. “Our guys did a great job.”

The fire’s damage to the structure is estimated at $100,000. The home’s content damage was estimated at $0 thanks to efforts of a specific fire engine team that salvaged property by covering everything with a tarp or removing items from the home.

San Marino Fire Department responds to about 50 fires a year, but a lot of people don’t know there are fires this big because the firefighters do their job so well, Phillips said.