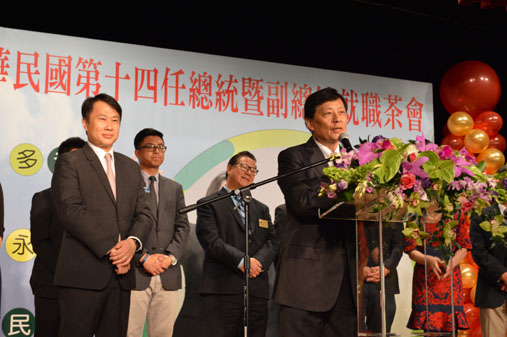 The San Gabriel Valley Taiwanese community celebrated the inauguration of Tsai Ing-wen – Taiwan’s 14th and first female president – at the Chinese Cultural Center in El Monte on May 21.

The event was attended by nearly 1,000 people. Attendees heard opening remarks from the Director General and congratulatory remarks from many Chinese-American elected officials or their representatives, who presented Hsia with certificates of recognition.

Hsia opened the event by acknowledging the success of Taiwanese democracy. He said, “By electing the first female president of the Republic of China, the people of Taiwan again made history. This peaceful election demonstrates the sheer resolve of 23 million people and the strength of democracy in the Republic of China.”

Congresswoman Judy Chu of the 27th Congressional District and other officials were overjoyed about the election of Taiwan’s first female president.

“I’m so glad the glass ceiling has been broken,” Congresswoman Chu said, speaking from a flower-filled podium. Recalling her meeting with Tsai Ing-wen in Washington D.C., she said, “I found her to be very focused on the task of helping the people of Taiwan live a better life.”

“We want to congratulate the new president on her leadership to continually strengthen the relationship between the United States and Taiwan,” he said.

Her speech, which was shown at the reception via tape delay on multiple large-screen monitors, outlined her new administration’s goals, including strengthening the social safety net, transforming economic structures, social fairness and justice, deepening international diplomatic ties and regional peace and cross-strait relations.

Tsai’s decision to not acknowledge the One China Principle has stirred a great deal of controversy on the diplomatic stage. The decision upsets the Consensus of 1992 between Taiwan and the People’s Republic of China that established an understanding of the existence of one China, despite differing interpretations.

“The two governing parties across the Strait must set aside the baggage of history, and engage in positive dialogue, for the benefit of the people on both sides,” said President Tsai during her inaugural address, which she had earlier delivered in front of the Presidential Palace in Taipei.

DUI Checkpoint Gets a Clean Sheet