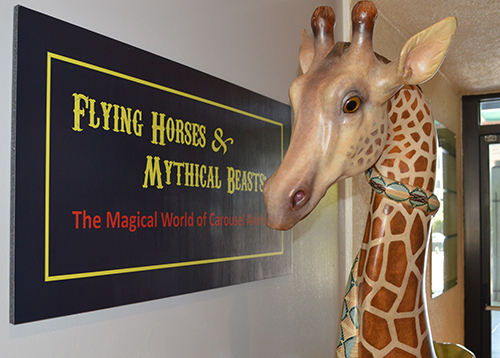 The Pasadena Museum of History’s latest exhibit marks the arrival of summer with a focus on a colorful staple of carnivals and fairs.

“Flying Horses and Mythical Beasts: The Magical World of Carousel Animals” is currently on display in the museum’s Kathryne Beynon Exhibition Hall.

“Something that’s quite unique about this exhibit is that the curator has insisted that they are all touchable,” said Jeannette Bovard, museum media consultant.

The exhibition’s curator, Lourinda Bray of Pasadena, is the owner of the 50-plus carousel figures from the Bray Collection. She stores her collection of more than 400 figures at her 7,000-square-foot warehouse in Irwindale. Bray said her favorite is always “the one I’m painting on at the time.”

Bovard said the untrained eye can see differences and similarities of the carousel figures, but Bray can see so much more.

“To someone like Lourinda who has the expertise, she can tell by looking at the style of the animal who the manufacturer was and how far back it dates,” she said. “What’s really interesting about it is that the different carousel manufacturers had different color palettes and design styles so when she restores something, it is in the proper colors and styling of that original…She’s a conservationist as well as an artist in her own right and obviously a collector.”

A number of the horse figurines have real horsehair for tails. The exhibition isn’t just horses; it is menagerie of animals as well as humans. The carousel figures include giraffes, lions, reindeer, cats, camels, cartoon characters and witches. There are also carriages.

The exhibition features memorabilia and art related to carousels and carnivals, as well.

A special lion carousel animal is specifically set up with a background so guests can take photos with it.

Bray said she’s wanted to paint carousel figures since she was 5 years old when she saw the carousel at Griffith Park.

“I remember standing there for such a long time choosing the horse that I wanted to ride,” she said, adding that she also insisted that it be an elaborately-decorated horse on the outside of the carousel. Bray said she remembers saying to herself, “Boy, the best job ever would be to get to paint these.”

She began buying carousel figures to restore in the late 1970s with interest from inherited money she invested wisely. Her first purchase was a horse from the Pomona Fair Carousel.

O’Malley heard about Bray and her collection while working with Bray’s friend, Christina Rose.

“We like to vary the types of exhibits that we do,” O’Malley said, explaining that the museum just had an exhibition on women’s fashion and textiles. She said the exhibition not only provided a light-hearted subject for the summer, but also was a great inspiration to tie to the carnival-themed “Happy Birthday Pasadena” celebration it had for the city’s 130th birthday on June 12.

Bray said in curating the new exhibit, she wanted to make sure she covered as many of the carousel styles in the United States, Mexico and Europe as she could.

“Each animal has its name,” Bray said. “It’s usually from the park it came from or when I got them.”

Many of the figures are from the now closed Santa’s Village in Sky Forest, Calif.

There’s a gallery guide, which is written in Bray’s own words, about each figure that guests can use while they view the exhibit.

“People have been really enjoying that because it’s like walking through with the curator,” O’Malley said. “If you don’t want to do that, you can just look at them and be inspired by them as an art piece.”

She said she’s been so happy to see the adults interacting with the exhibit pieces, as well.

“Flying Horses and Mythical Beasts: The Magical World of Carousel Animals” runs until Aug. 28. Pasadena Museum of History is located at 470 W. Walnut Street in Pasadena. General admission is $7. Museum members and children younger than 12 get in for free. As part of the Pasadena Museum of History’s participation in the Blue Star Museums program, it is offering free exhibit admission from Memorial Day to Labor Day to active duty military personnel and their families. Museum hours are from noon to 5 p.m. from Wednesday through Sunday. For more information, visit www.pasadenahistory.org or call 626-577-1660.