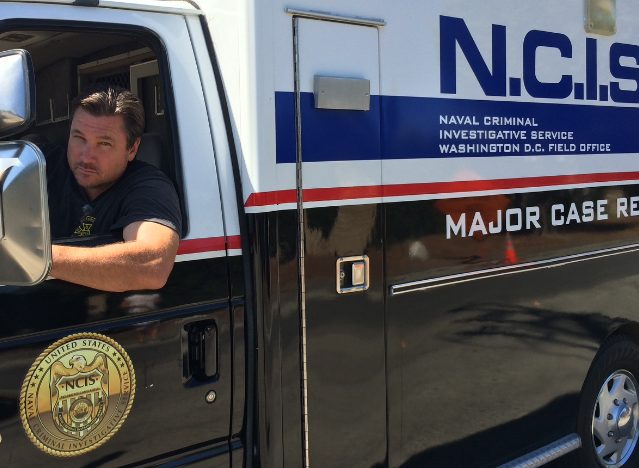 San Marino’s Vincent Ary knows no other occupation than the one he entered right out of Arcadia High School. And by the sound of things, that’s just fine with him.

Ary followed his brother, Paul, into the world of film and television production and hasn’t left, listing on his dossier such blockbusters as “Hill Street Blues,” “JAG,” “Sex and the City,” “The Truman Show,” “Doctor Doolittle,” and “The Relic.”

But his main source of pride is the 14 seasons he has spent as Rigging Best Boy for NCIS, the No. 1 watched drama series in the world, where he has rubbed elbows and become friends with Mark Harmon, who stars in the show.

As Rigging Best Boy, Ary is in charge of hiring the workers needed for the job and renting all the necessary items to film an episode that involve electrical power and equipment.

“Rigging is basically all the power that is needed on any given location,” he explained. “Since we are unable to just go to a location and ‘plug in’ because of the amount of electricity it takes to film at any given location, we need to find a safe place to set the portable generator, and run power to the set.”

Another part of his duties includes finding filming locations that fit the script.

“I get the ‘new script’ every other week,” he said. “After reading through it, the company, which includes the director, gaffer, camera department and the lighting and grip departments, all get into a number of vans and with the episode plot in mind, drive around to various locations to find the best possible place to film. We also determine what kind of equipment we will need. The director looks over the locations until he finds the one that best suits the shot.”

That’s when Ary goes to work. For a Tuesday filming schedule, Ary needs to assign a crew and order rental equipment on Friday and rig the location on Monday. While filming takes place at one location, Ary and his crew are off preparing the next location.

“It’s like hopscotching,” Vincent said. “But it’s a lot of work.”

NCIS is shot on a lot in Valencia, but the crew is also on location for three of the seven days needed to film each episode. That means frequent visits to Pt. Mugu, downtown Los Angeles, the Universal Studios backlot, all over the Santa Clarita Valley and as far south as San Diego. “Just to name a few,” he added.

Occasionally, he gets the favorable draw of filming in Pasadena and on more than one occasion, the Huntington Library, Art Collections and Botanical Gardens.

Ary began in the field of feature films, but transitioned to television.

“The hours were killer,” he said. “You can make a lot of money, but you are never home. By union rules you can work a 23-hour day as long as certain break times are adhered to.”

Written into his television contract is a proviso that he gets to be home with his family at dinner time.

“It’s all about everyone getting along with each other,” Ary said. “The trailers are all wide open and everybody is getting along. Mark is a great guy and he sets the tone of the location.”

Vincent is married to Cynthia (Boggs), who grew up in San Marino and is currently the President of San Marino High School’s PTSA for the second consecutive year. The couple has two sons: Matthew, a rising senior at SMHS and Thomas, who will be a junior when school is back in session. Their daughter, Mary Jane, will be an eighth grader at Huntington Middle School.

Matthew and Thomas were key figures on the Titans’ Rio Hondo League and CIF Champion football team and head Coach Mike Hobbie is already counting on the Ary boys for major contributions this coming season.

Last fall, his work schedule caused slight tardiness at a couple of the football games, but Vincent hopes that will change this year.

“I’m really excited to see my boys play football this year, and I’m going to do my best not to miss a single game,” he said.

In the meantime, NCIS will soon begin its 14th season and a contract was recently signed for two more.

Whatever the case, Ary is the lucky man who finds happiness and purpose within his occupation.

“Some people are cut out for sitting in a cubicle all day, talking on the phone,” he said. “I am not. I have to get outside and move around and get things done.”

He claims to have never watched a full episode of the show, but for reasons other than you might think.

“Cynthia and I will be watching the show and I will say something like ‘look over there behind that wall. While they were filming this scene, I was sitting there with the guys eating a bagel.’ She can’t watch it with me.”

“But I am truly blessed,” Ary concluded. “Every day at work for me it’s like that feeling you have when you were in school and were going on a field trip and your mom packed you something special for lunch. That’s the way it is for me. Every day is going to be a different day.”

DUI Checkpoint Gets a Clean Sheet