A Chance to Enjoy the Game

When he was rather suddenly hired last November by the Philadelphia Phillies to be the team’s bullpen coach, 1977 San Marino High School graduate and 14-year Major League pitcher Jim Gott said the transaction was “the furthest thing from my mind.”

Gott had been the Los Angeles Angels’ Minor League pitching coordinator for the last five years and figured he had found a comfortable groove.

“I thought if I could do this for the next ten years I would be very happy,” said Gott, who pitched for Toronto, San Francisco, Pittsburgh and, finally, his beloved hometown Dodgers. “It wasn’t that I didn’t want to get back to the big leagues. I figured I had already been so blessed to have been there for a long time.”

Gott retired in 1995, then spent three seasons co-hosting the Dodger Talk pre and post-game radio shows. He then emceed the in-house Coca-Cola Challenge, roaming Dodger Stadium between innings and asking trivia questions of eager fans that were broadcast over the scoreboard’s video system.

In 2010, Gott sent a résumé to former Dodger General Manager Fred Claire, who hooked Gott up with the Angels’ minor league position, which meant long, hot days (and nights) in Arizona for what is commonly referred to as “the Fire League” due to the high temperatures during summer.

There, Gott worked with just about every young pitcher in the Angels’ system at one time or another.

“That has really prepared me for what I am doing now,” said Gott. “I watched over and managed all the pitchers and 12 minor league pitching coaches. We had to develop and carry out a plan for each player. It has been very interesting.”

Gott gave a tip of the cap to his wife, Cathy, who has for years operated an organization called Education Spectrum, a Pasadena-based company that helps plan out strategies for those on the autism spectrum. The Gotts have an autistic son, Danny, who has become something of a local celebrity through his “Danny’s Farm” charity, which provides opportunities for those with special needs to interact with animals.

During his later Dodger days, Gott worked at Education Spectrum.

“That really helped me out,” said Gott, with extreme emphasis on the word “really.” “When working with the special needs community, there is a constant stream of reports stating goals and objectives. We had to come up with measurable goals and then when those goals were met, we had to determine another set of goals. That is very similar to what we are doing with young pitchers. Providing them with a set of goals and objectives. In baseball, it can be a very slow progress.”

Gott was back in town recently, now sporting the classic red of the Phillies instead of his beloved Dodger blue, and reported that things in his new role are nicely falling into place.

“It has been great,” Gott said in his typically upbeat fashion. “I really enjoy the daily routine of baseball, which I became very familiar and comfortable with as a player.”

But even Gott admits the machinations of the game have changed drastically since his days in the bigs.

“Analytics,” Gott said. “So much of the game now is about analytics.”

It’s something Gott was introduced to during his stint with the Angels and it is even more prevalent at baseball’s highest level.

The “analytics” to which Gott refers includes the mathematical analysis of the game, where past performance is measured against future probability to concoct a game plan, in Gott’s specific case, which of the pitchers in Philadelphia’s bullpen will stand the greatest chance of getting the most outs against the opponents’ hitters.

For those who subscribe to the outdated belief that professional baseball players spend the day at the golf course and show up at the yard two hours before the first pitch, well, that simply doesn’t happen. A team of three staff members back in Philadelphia convert all of the previous game’s statistics into what they call a “war report,” which is given to the coaching staff the next morning. A steady stream of emails includes any and all roster changes that have been made throughout the major leagues in the previous 24 hours as well as us updated statistics on opponents.

Six hours before game time, Gott joins a meeting of the entire coaching and training staff to break down the reports and formulate a plan of attack based on the avalanche of information. During warmups and batting practice, Gott mingles with players and checks in with everyone under his watch. The actual game requires his full concentration.

“I have already collected all of the information, so during the game, I am constantly following what is taking place out on the field,” Gott said. “I know the pockets of hitters each pitcher would be facing in specific situations if they have to be sent into the game. We have already talked about the different situations and who would be the best guy to send out there.”

During the early innings, Gott focuses on his long relievers—the pitchers who are able to perform for the larger amount of innings—and keeps a track of the pitch count of whoever happens to be on the mound. Gott must also consider who would immediately enter the game in the event the current pitcher is injured or ejected.

As the game goes on, Gott will speak with whoever he and Manager Gabe Kapler feel would be the logical next choice. 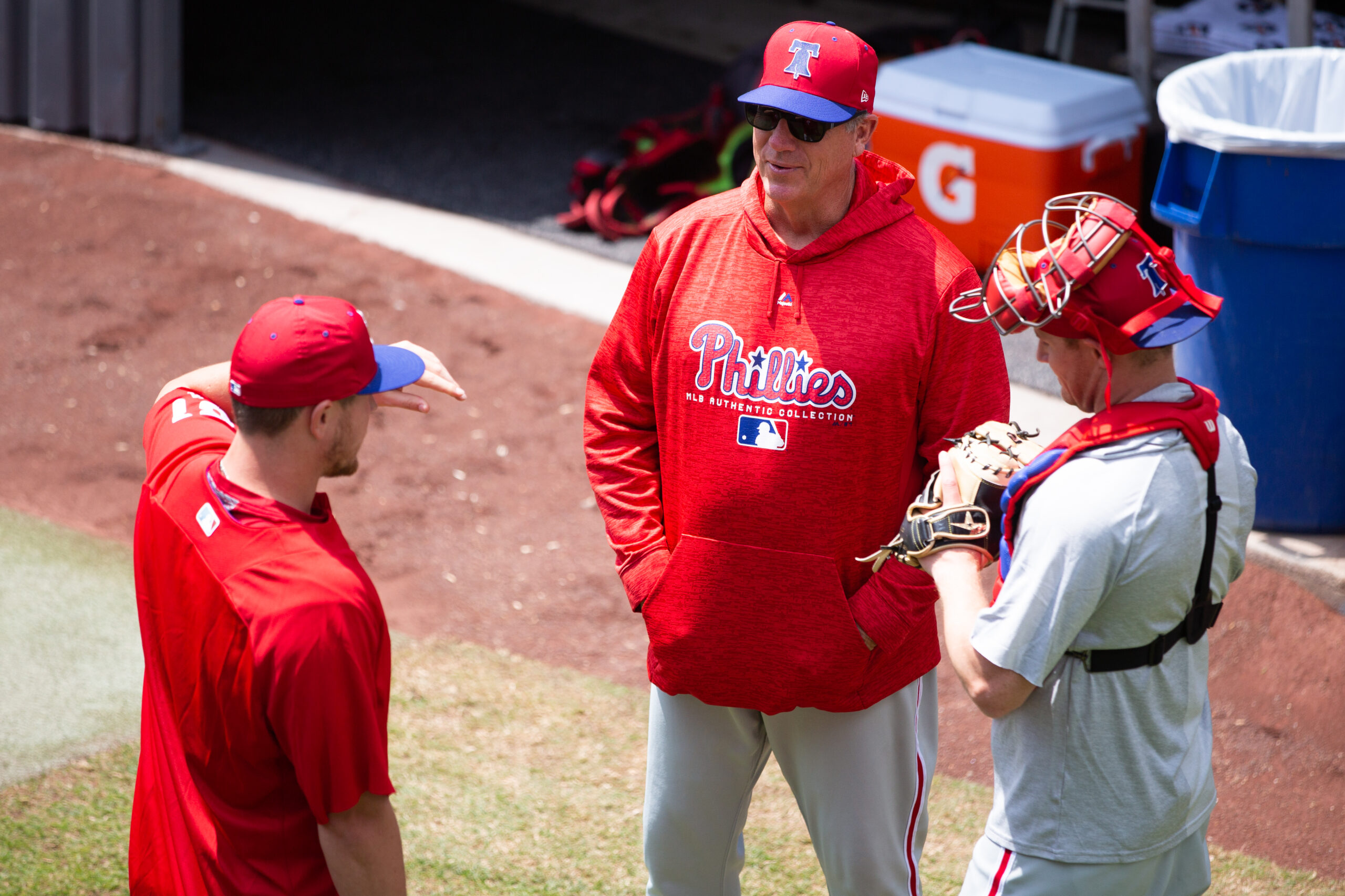 “Each guy has his own routine to get ready to pitch and my job is to kick off that routine,” Gott said. “We are constantly discussing which batters are coming up next in the order and who the opponent has on the bench as a possible pinch hitter. As an organization, we have developed a profile for each batter. What pitch do we throw first? What pitch do we throw with two strikes to get the batter out? What do we throw when we are behind in the count?”

A relief pitcher himself—he was named Major League Baseball’s Reliever of the Year in 1988—a sense of astonishment washes over Gott when he discusses the evolution of the scouting process.

“It was nothing like this when I was playing,” Gott said. “So much of the decisions were made on gut instinct. Now, it’s numbers.”

Los Angeles and Philadelphia split the four-game series in late May and Gott seemed to spend most of his tile at the railing of Dodger Stadium visiting with friends and well-wishers. That positive energy has infused his new position as well.

“Gabe is a great guy,” Gott said of Kapler. “This is his first experience as a manager and the way he put the staff together is incredible. This is a very diverse group of people who have all come from different experiences. That is very uncommon in baseball. Usually, a new manager will bring in all their friends. We are ten very different guys who have all been brought together.”

Though cliché in the sports world and certainly a sermon Gott has heard preached on countless previous occasions, Kapler encourages a “team” approach.

One that is apparently working, even according to the touchstone of “analytics.” After finishing dead last in the National League’s five-team Eastern Division last year with a 66-96 record—31 games out of first place—the Phillies are currently 38-33 and just 4-1/2 games behind the first place Atlanta Braves.

“This is unbelievable, a great experience,” Gott said. “The 14 years I played in the big leagues went very fast. I put a lot of pressure on myself when I played and I thought if I got back into this I would really enjoy it.”

Gott mentioned a recent visit to Philadelphia from his son, Nick, who recently graduated from Harvey Mudd College and was an all-CIF football player at San Marino High School.

“Nick and I were running around in the outfield catching fly balls during batting practice with these big, beautiful clouds in the sky,” Gott recalled. “We just stopped and looked around and enjoyed the moment. That is what this is about. Enjoying the moment. I am really grateful and fortunate do be doing what I am doing.”

“Mr. Banta, Coach McNamee and my dad are so important in my life,” Gott said. “They gave so much to me as both a person and a ballplayer. When I look around the stadium, it is their faces I see.”

Gott then bounds off to meet with all the members of the Phillies’ bullpen to lead a non-denominational prayer, a routine he launched this season.

“It’s our chance to come together and become our own group,” Gott explained. “We already know who is going to pray. This being baseball, there is a lot of superstition. If we won and you led the prayer before the game, you get to do the prayer again. If we lose, it gets passed on to someone else. The important thing is we are together as a group and we are in it for each other.”