One Serves, Many Sacrifice 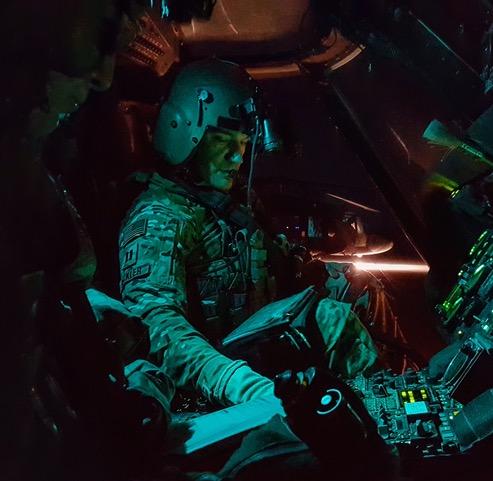 As a young boy, Christian Beckler had such a strong love for America, its flag, and helicopters that his mother began calling her son “My Little Patriot.”

Those passions evolved into a decision to apply to the United States Military Academy at West Point with the hopes of one day flying in the Army. Years later, that “Little Patriot” is a Captain in the United States Army, where he now serves as a Black Hawk helicopter pilot.

“By the age of six, I had already decided that I wanted to be a fighter pilot,” Captain Beckler said. “It took a while to determine which branch of service was right for me, but the Army ultimately seemed like the best fit.”

Captain Beckler was 10 years old when the infamous September 11, 2001 terrorist attacks on the United States rocked the nation.

“I was…very impressionable when 9/11 happened, so that really cemented my desire to be in the military,” Captain Beckler explained.

A 2009 graduate of San Marino High School, Captain Beckler was very active in several aspects of campus life while at SMHS. In addition to playing football all four years as both center and long snapper, Captain Beckler participated on the wrestling, soccer, and track teams. He also created and was president of the Stars and Stripes Club that sent care packages and letters to troops who were deployed overseas.

“I decided to start the club after hearing about charities that volunteered their time by putting together care packages and sending them to soldiers who were deployed,” Captain Beckler explained. “It seemed like a simple way to give back.”

Theresa Murphy, the Honors Calculus teacher at San Marino High School, knew Christian from his leadership position in ASB, the local version of student government. The two also bonded over a shared love for skydiving.

“Christian is a born leader, with a good sense of right and wrong,” Murphy said. “One of his favorite sayings is ‘Sinking your boat does not make mine rise higher’ which just goes to show how humble he is.”

Loren Kleinrock, who was principal of SMHS during Christian’s high school career, described Captain Beckler as a “hard worker, someone who is thoughtful and acted ethically. He was focused, made a commitment to something bigger than himself, demonstrated courage on the football field, was smart, and was always respectful of authority.”

“His potential for leadership was obvious,” Kleinrock added.

Christian’s football coach, D.R. Moreland, had similar praise for the now military Captain. “On the football team, Christian was a natural leader, someone who led by example and encouraged his teammates to do their best,” Moreland exclaimed. “He is a wonderful person.”

After graduating from West Point in 2013, Captain Beckler began his required 5-year commitment to the military. He completed a 2-year flight school assignment, where he trained to pilot the Black Hawk helicopter. As part of his duties, Captain Beckler brings soldiers back to their base or transports them to their next location.

After flight school, Captain Beckler signed on for an additional three years of service. His first deployment was completed after serving seven months in Afghanistan last year.

Mollie and her husband, Ben Beckler, have supported their son from the very beginning. “My parents’ support is the reason I am where I am today,” Christian said. “When my parents realized I was serious about wanting to be a pilot and attend a military academy, they did everything in their power to foster that dream until it became a reality. At ten years old I was going on college tours on the other side of the country and getting exposed to all kinds of people and resources that really helped cement my enthusiasm.”

Christian’s father was aware early on of his son’s love for aviation and the military. “Christian identified with the military at a very young age,” Ben Beckler said. “He gravitated toward his grandfather, who was in the Navy and he grew up hearing me talk about General Chuck Yeager. He really looked up to him as one of his heroes.”

His mother had a similar outlook on the situation.

“One of his teachers here said to me ‘How can you let him do that?’ and my answer was ‘How can I not?’” Mollie Beckler said. “He wants to go defend his country and support all of us Americans. We should be thankful of his willingness to serve his country rather than tell him to pursue a different career.”

“The biggest challenge for me during deployment was knowing we wouldn’t see Christian for the number of allotted months,” Mollie Beckler explained. “As the deployment moved to the final months and weeks, the anticipation and uncertainty of when he would be back in the U.S., and the associated calendar countdown was also very challenging.”

“I pay very close attention to international news because it has the ability to affect me on an extremely personal level,” he said. “After getting married last year to my college girlfriend, I’ve found that my tolerance for unnecessary risk is extremely low. We have a lot of plans together, and the last thing I’d ever want to do is unnecessarily jeopardize our ability to achieve our goals. I hate being away from home now more than ever before.”

Captain Beckler’s communication with his parents from Afghanistan helped ease the pain brought on by the distance through a cell phone service plan and Wi-Fi network.

“It was very therapeutic to to text, call, or Facetime with my family almost daily despite the 12-hour time difference,” Captain Beckler said.

Needles to say, Mollie Beckler’s cell phone was with her all the time in the event her son called at an odd hour.

“The first phone call I got from him was when I was in a sophomore meeting in the career center during March of last year,” Mollie Beckler explained. “The number was from Virginia and I assumed it was spam. I ignored several calls until my husband called me and told me to answer my phone –  that was my son calling.”

As it turns out, a landline that is routed through Virginia is employed for those using the service from Afghanistan.

“Are there moments of worry? Yes,” Mollie Beckler continued. “When your child is in Afghanistan or anywhere else representing the armed forces, obviously, your mind goes to that. But in this age of technology, Christian was very good about getting to us before something hit the press. We would get a call and he would say, ‘you’re going to hear about something that happened, but I’m fine.’ But I also say this, every one of us who lives in Los Angeles who has released their children to drive on our freeways has also accepted a fair amount of risk. Christian is well-trained and the soldiers have each other’s backs.”

Working at a high school and having a son who serves in the military has affected the way Mrs. Beckler sees shootings which take place on school campuses.

“It bothers me because the weapons that are being used in these school shootings are the same weapons that the military uses,” she said. “They are weapons of war. It is hard for me to see those used on any human being.”

With his willingness to choose such a dangerous career path, Captain’s Beckler’s parents are justifiably proud of his accomplishments and willingness to risk his life for his country. Yet, “proud” isn’t the word Mrs. Beckler would use to describe him.

“When I think of what he has done and accomplished, ‘proud’ is not the first word that comes to mind,” Mollie Beckler said. “I am more in awe of both of my kids. My husband and I are in awe of the things he has been able to do. We watched him set a goal as a very little boy and we watched him make that goal happen. I look at the Black Hawk helicopter he flies and knowing that he is a pilot in command is crazy. He’s only 26!”

Christian’s sister, Carlee, was also a star athlete at San Marino High School, graduating in 2011. While at SMHS, Carlee played four years of varsity soccer as well as volleyball, track and swim.

She attended Notre Dame, where she was a rare four-year varsity letter-winner for the women’s rowing team. Carlee is now studying medicine at USC’s Keck Medical School.

Captain Beckler’s list of accomplishments are extensive, entailing both individual and collective victories. At the age of 24, he earned the title of Pilot in Command, which entrusted him with flying the $13 million Black Hawk.

“I took a lot of pride in the unit I served with while in Afghanistan,” Christian said. “I was part of a 4-man headquarters element that took personnel from different units from Wisconsin, Colorado, and Washington, forced them into a small outpost in a war zone, and ultimately got them to work together to provide crucial air support for the better part of the year with a 100% success rate. At the beginning of our time there, it seemed like an insurmountable challenge. But today, a lot of us are very good friends who take a great deal of pride in our achievements.”

“For me, I am in awe of his life, his choices and career path, and dedication to service over self,” Ben Beckler said. “I didn’t do anything that I feel should entitle me to be proud of his accomplishments. I believe that Christian should be proud of the commitment, accomplishments, and career path he has chosen. I feel very blessed and fortunate to have a son like him.”

With the title of an officer, comes many responsibilities, but Captain Beckler wanted his officers to like and respect him.

“It says so much about who he is as a person and that he’s more than just their boss,” Mollie Beckler said. “He tries really hard to treat them as human beings and always tells them he is there for anything if they need it.”

Captain Beckler is currently stationed in Tacoma, Washington at Joint Base Lewis McChord, where he will remain until July when he will take a leadership course in Fort Rucker, Alabama. From there, he will be reassigned to a new Army base, but the location as of now is unknown.

Looking ahead, Captain Beckler is unsure whether he will continue his military career or find another profession back home when his commitment is finished in approximately five more years.

“The largest factor influencing my decision is my wife, Maggie, and my desire to start a family,” Christian said. “We wholeheartedly intend to have kids in a few years, but I feel I owe it to my family to provide a sense of stability that life in the military can’t provide. I currently have my sights set on obtaining a graduate degree and perhaps working for a non-government organization, striving to make positive change, and am really looking forward to chasing those goals after I accomplish everything I want to do in the Army,” he said.

As if he hasn’t accomplished enough already.

Dahlys Ang is a 2018 graduate of San Marino High School and served as co-editor of the Titan Shield newspaper her senior year.