A popular adage declares that “what happens in Vegas stays in Vegas,” but Paige Kunitake will forever carry around pieces of her experience that took place in that desert city on October 1, 2017.

For it was there and then that a man fired 1,100 rounds into a crowd that had assembled on the famed Strip for a country music show, killing 58 and injuring 851, according to records.

A fan of festival headliner Jason Aldean, Kunitake was toe-tapping her way through the final set when she almost became a statistic herself.

“Ten feet,” the 2011 graduate of San Marino High School said when asked how far away she was from some of those who were shot. “And when we were leaving, we ran past five or six more.”

What ended in terror began as a fun weekend in Vegas. Kunitake and a friend hit the town on Friday afternoon for the three-day Route 91 Harvest Festival. The plan was to stay through Aldean’s performance on Sunday night and then pull one of those iconic, late-night drives back to Southern California just in time to get to work on Monday morning. 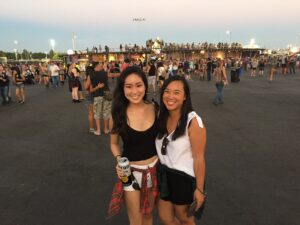 “Jason is one of my favorite artists,” Kunitake said with a chuckle. “My friend wanted to leave earlier, but I wanted to stay.”

As it turns out, that decision could have been fatal. At the least, it was life-changing.

Like most in the audience, Kunitake initially mistook the gunshots for fireworks until voices around her told everyone to hit the deck.

Kunitake and her friend sprinted away from the gunfire and ended up at a time share facility, where they eventually stayed the night.

“We ran from the concert field through the parking lot, hid under cars, jumped a fence and then ran to the nearest open door,” she said.

Kunitake immediately phoned her parents to report on her condition and headed back to L.A. on Monday morning.

But that wasn’t the end of the ordeal. In fact, a strong argument could be made that it was just the beginning.

“I had no idea how bad it was until later, when I saw the reports on television and online,” she said. “I was overwhelmed with sadness.”

The former Lady Titan basketball star spoke openly about her decision to enter therapy and an immediate struggle with survivor’s guilt. 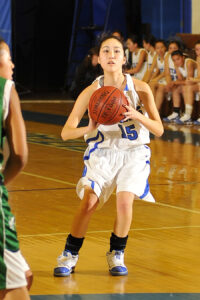 “I felt guilty that I was there and I was safe and some people didn’t get to see their loved ones again.” Kunitake said. “I felt extremely guilty and that is one of the things I discussed in therapy. I got out with just a few scratches and I felt guilty.”

Paige went to therapy once a week until a couple months ago and said she considers herself to be healed, though acknowledged “I will always have some level of PTSD [post traumatic stress disorder] and a reaction to loud noises.”

“Just being able to have this conversation and speak to the newspaper is an indication that things are getting better,” she added. “I am happy to share my story. Everyone deals with problems or adversity in their life and if my experience helps someone deal with their challenge, that’s a good thing. I think we often take life for granted. If anything, I have learned to appreciate the life I have and it has helped me to be present. It has taught me to love and be grateful for the people I have. It has given me a perspective that most people don’t get. I am so lucky. The chance of not making it back was so high.”

She also has learned to take things a little easier.

“I don’t get nearly as wrapped up in my daily life,” Kunitake said. “I love my family and I feel so grateful. I hadn’t gone through much hardship and this has altered my life on such a grand spectrum.”

It has also altered her opinion on gun control.

“I’ve never been a big politics girl, not for lack of caring, I just never kept up with it,” she said. “With that being said, I’ve also never really been a huge advocate for guns, but understand the constitutional right to bear arms. After experiencing a tragedy like Las Vegas, it hurts to continually watch guns fall into the wrong hands. It shakes me to my core every time I hear about a new shooting—whether it’s one, ten or twenty-plus casualties. I think I stand where I’ve always stood, I just believe in it more firmly. There should be tighter background checks and no access to automatic weapons.”

“I felt overwhelmingly sad and heartbroken for those who we lost that day and their families,” she said. “I also felt extremely lucky and grateful reflecting on how hard the past year had been. The whole day kind of had a somber feeling for me, but I had support of people I love.”Those people she loves include her mother Ann and father Reid. Leigh, her sister, graduated from San Marino High School in 2013 and works for Whitter Trust. Blake, her brother, graduated from San Marino High School and is currently a senior at the University of San Diego. Paige graduated from the University of Washington with a BS in Biology and currently works in Los Angeles as a medical assistant.