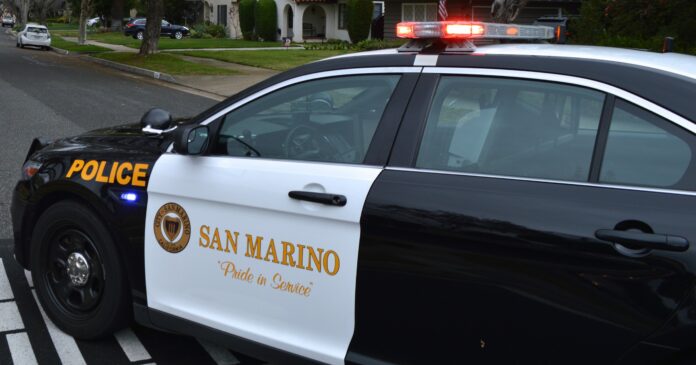 The San Marino Police Department prides itself on its dedication to the community and “Pride in Service,” with that slogan noted on the patrol cars which circulate throughout the city.

But the department currently has five officer and two cadet vacancies, according to Chief of Police John Incontro, and is currently processing several officer candidates. Of those candidates, background checks have already started and hirings are expected between the months of April and May. Due to the vacancies, the department has had to backfill with about 17-20 overtime details per month.

“So there’s a considerable overtime use with these vacancies,” Incontro shared with The Tribune. “The officers are filling in and still working very hard.”

The SMPD currently is comprised of one chief, two commanders, five sergeants (two of whom are detectives), four corporals (one of whom is a detective) and eleven officers (two of whom are detectives). There are four cadets, one of whom is currently deployed in Kuwait in the Air National Guard. In addition, there is a records dispatch manager, four full-time dispatchers and one part-time dispatcher. The department is seeking to make the part-time dispatcher into a full-time position, according to Incontro.

“The dispatcher position is also a clerk position,” said Incontro. “So we can use the dispatcher for a multitude of uses and it’ll help us with a lot of our records needs and reporting—a lot of different things. It’s a big benefit to us if we can make this a full-time position.”

Patrol in the SMPD is referred to as “flat deployment,” according to Incontro, where the deployment of four teams of four are built to be the same. A deployment is comprised of one sergeant, one corporal and two officers. Each has their own squad car. The corporal and officers are on active patrol during the shift, while the sergeant is either on patrol as well or back at the station.

“Unless the officers are hailing a call for service or out completing a report, investigation or even having lunch, the officers are always out in the field,” said Incontro. “We don’t wait for a call at the station to respond. We’re doing proactive policing and preventative policing by patrolling areas of the city.”

Most calls can be answered by one officer. With serious calls, SMPD responds with a minimum of two officers, if not more, depending on the situation.

The patrol shifts recently changed in the past month. A shift is 12 hours and previously SMPD worked on 7 a.m. to 7 p.m. shifts. The adjusted start time is now 6 a.m. to 6 p.m. Incontro said that with school starting between 7:50 a.m. and 8 a.m., the needs of the schools were better served by starting an hour earlier. Traffic infractions were also greater in the 7 a.m. hour and the change ensures that officers are out working during that time instead of being between shifts.

Incontro shared that the amount of work has steadily increased over the past several years due to various legislative mandates. There will be a new reporting process for the completion of crime reports. The department will be shifting from the Uniform Crime Reports (UCR) of the Federal Bureau of Investigation (FBI) to a program called the National Incident-Based Reporting System (NIBRS). The new program has additional requirements that work to ensure officers have added key details in the reports. In the report review before the reports reach detectives, about 75 more questions have to be answered.

“There will be a lot more data through these questions but it’s requiring a lot more work,” said Incontro.

With the additional workload, Incontro shared that a goal for next year’s budget is for the department to increase by two officers.

“It’s primarily a recruitment and retention issue because agencies across the country, every single agency, is struggling to find officers and to obtain them, and we’re not different,” said Incontro.

Incontro also detailed the “special community” that San Marino is, and the recruitment of officers is carefully undertaken to make sure officers are a good fit.

“We’re a unique place because the type of agency we are, what kind of work our officers do, the fact that there may not be as many options of types of work,” said Incontro. “We’re fortunate. We have relatively no violent crime, we don’t have gangs, we don’t have shootings. It’s property crime. We’re very connected to the community, and so not every officer applicant would fit in our agency. So we have to make sure that’s the kind of person that wants to be engaged in the community very closely.”

In the department’s work to provide the best service possible in the most efficient ways, Incontro said that he’s careful to consider the bigger picture.

“We are always mindful of the cost and requirements of funding a police department,” said Incontro. “We want to make sure we’re very diligent and careful in the use of the city funds because it’s not just the police department that makes the city—it’s the fire department, it’s the library and the other city departments and the public works that are required to make sure the city stays the same.”

“We have to be a part of a team so we’re always mindful of trying to do the best we can with whatever’s available.”