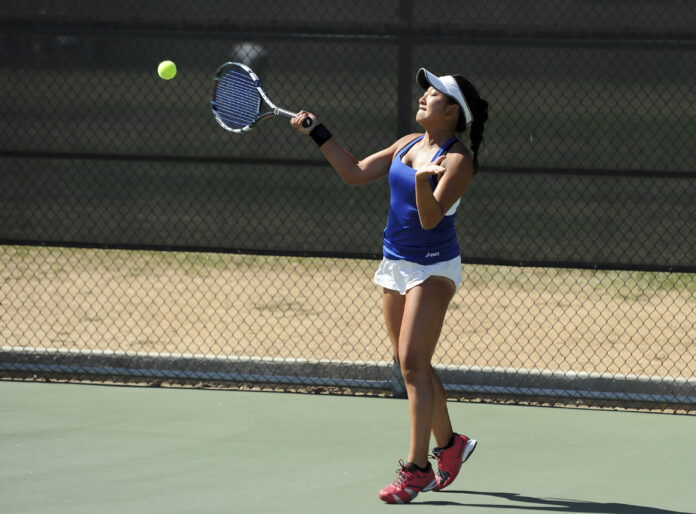 It must be something about the blue…

“Yeah, must be,” Libby Chang said with a hearty laugh.

It’s not just the color, it’s the entire nickname as the 2018 graduate of San Marino High School has taken her tennis talents to Wellesley College, whose teams are called the Blue.

Chang has stepped right into the starting lineup at the Massachusetts school, compiling a 5-4 record in singles action and 6-6 mark in doubles play for the Blue, who are 9-5 overall and 3-0 in the New England Women’s & Men’s Athletic Conference, or NEWMAC.

Chang became interested in Wellesley when the tennis team made a visit to Southern California on a spring break.

“After meeting the team and then taking my own official visit to Wellesley, I could not help but apply on an early decision basis,” Chang said recently from the East Coast. “Wellesley is the quintessential mix of both academics and athletics. It is the place where I am best able to find opportunities as a student-athlete. The campus is beautiful, the student body is unbelievably incredible, and the resources are never-ending.”

The daughter of Jennifer and James Chang said she has “found a home” at Wellesley.

“During my first semester, I was hesitant to even consider this foreign place home,” she said. “Before long, though, I was able to surround myself with friends that made me look forward to every day here. The academics are undoubtedly challenging, but I now know that San Marino has more than adequately prepared me for college. All my professors have easily exceeded my expectations of their role. But it’s the people at Wellesley who make it special. The all-girls experience has provided a priceless opportunity to grow and learn more about myself and my place in this world among outstanding women who have, are, and will do unthinkable things. Although unconventional and sometimes hard to imagine, the women’s college experience is one that I would definitely recommend to other girls. That being said, there is definitely a sense of competition at Wellesley, but it only encourages me to work harder every day.”

The $64,000 question: How does a Southern California girl, let a lone a lifetime tennis player, adapt to that often-cruel East Coast climate?

“Where do I even begin,” Libby said with a laugh. “Before coming to Wellesley, I never played indoor tennis. Now, thanks to the weather, I’ve played in a myriad of indoor courts all across the East Coast. Off the courts, I have definitely learned to love my snow jacket, snow boots, and the concept of layering! The best part is seeing the drastic difference in seasons.  When I first came to Wellesley, the sweltering heat was worse than that of SoCal. Then it quickly cooled down and the hue of the leaves changed to an entire palette of vibrant colors. Then winter hit and the first snow felt like a real ‘winter wonderland’ experience. All in all, the weather has made me forever grateful for the weather back home.”

The tennis season has allowed Libby to better know her teammates.

“They immediately felt like my sisters,” she said. “The upperclassmen, my big sisters and role models and the three other first-year players coming in with me quickly became my closest friends. The amount of time, energy, and passion that we pour into our sport brings us together on and off the court. We just recently got back from our Spring Break trip to Orlando where we really started to bond and it felt like family, with all its ups and downs.”

It’s a safe bet there will be more of the former than the latter.

Facebook
Twitter
WhatsApp
Previous articleA Rising Star On the Track, Trail and In the Classroom
Next articleJustin Mesa Will Be Next Titan Head Football Coach