Titan Basketball Is ‘Something Special’ 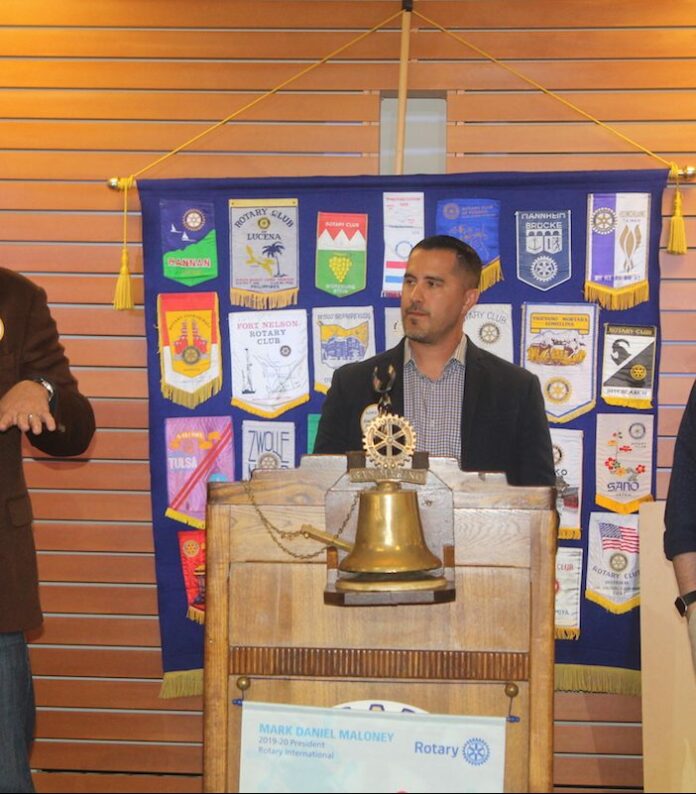 “I asked them what they were afraid of…what are your fears?” the man known to many as “Coach Pop” said during his recent keynote address to San Marino Rotarians. “I was shocked when the number one answer came back as ‘fear of failure.’ That came as a shock to me because there are so many things in our current society that we can fear. That made me think that I want us all to become believers. First I want the boys to become believers. And then. hopefully, the community will become believers. But I will tell you this, we are building something we are very proud of.”

Now entering his tenth season at the helm, Papadopulos then displayed the records of the Titan basketball teams that preceded his arrival, which included many seasons during which San Marino won just one game in Rio Hondo League action.

“I came in here with eyes wide open,” he said. And possibly for good reasons.

While visiting San Mario High School to observe a class, Papadopulos told the audience he heard the words that would eventually lead to his hiring.

Not long after, Papadopulos received a phone call from the mother of a Titan basketball player who was doing a little advanced scouting in an effort to find a new head coach. Within days, he was sporting San Marino’s royal blue and attempting to right a ship that had been listing for decades.

The line elicited a laugh as loud as you will ever hear at a Rotary meeting, but Coach Pop quickly began to detail the many positives that soon began lavishing his program. The Titans have been regulars in the CIF Playoffs, have consistently finished in the top half of the Rio Hondo League and in 2017 advanced to the Elite Eight before losing a game that many feel featured one-sided officiating against the Titans that resulted in an overtime loss.

Possibly more important than the wins and losses, Papadopulos has instilled a set of family values into the program.

“My faith is a very important part of who I am,” he said. “It led me on a quest to determine what values are important to us. It has to be about more than winning. You have to earn things.”

Hence, Papadopulos instituted one of many slogans that are readily apparent upon greeting any coach or player as “Earned Not Given” is emblazoned upon all basketball materials. He has also instituted “The Brotherhood,” which seeks to unite players from throughout the history of the program. Following the lead of P.J. Fleck, the dynamic head football coach at the University of Minnesota, the team has also adopted the “Row the Boat” philosophy, which encourages each member of a team to pull participate.

“We all have to row together,” Papadopulos said. “We never give up.”

Since his hiring, Papadopulos has also preached a message of appreciation, gratitude and a desire to give back to the community. Hence, he has brought his players, coaches and other members of the basketball family to Union Station Homeless Services in Pasadena, where they prepare meals for the less fortunate.

The kinship might be paying off. The Titans are 2-0 in the young season while playing a wide-open system that encourages frequent substitution and free shooting. The record will tell one story, but the experience could reveal something else, entirely.

“Athletics is a great platform to learn things you don’t learn in the classroom,” Papadopulos said. “Failure is one of our greatest teachers. It really hit me when nine out of ten players mentioned the fear of failure and yet it is such an important part of learning. Kids just want someone who believes in them and that is where the program started taking off for us.”

By the end of January, we’ll get to see where it lands.