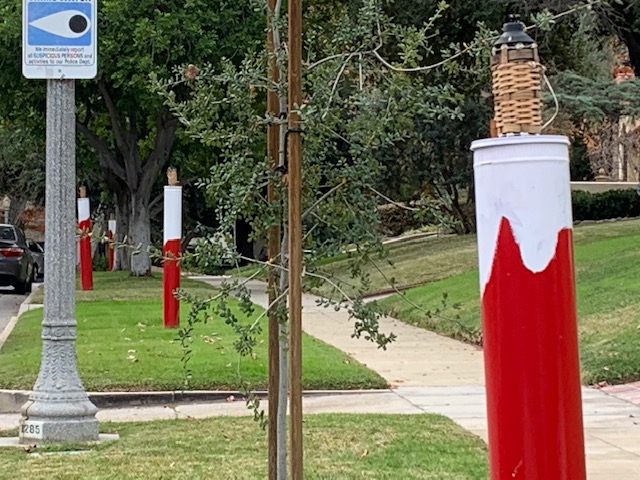 A time honored holiday tradition taken up by a young San Marino resident involving open flame tiki torches along Lorain Road took an unfortunate turn Monday when the San Marino Fire Department was called to the scene in order to investigate a small grass fire that resulted when one was knocked over. In the spirit of the season, the SMFD worked with the boy’s family to set safety precautions in order to allow it to continue through Christmas and a safer solution will be coordinated for next year.

The teenage boy, a resident on the street, helped restart the tradition in 2015 and requested a fee from homeowners to install hand-painted, 5-foot decorative metal torches, resembling candles, with a small open flame at the base of their property on the street side of the sidewalk, according to Fire Chief Mario Rueda. When the SMFD responded, they learned that the boy had placed around 80 torches at homes from Sherwood Road to St. Albans Road.

“The Fire Department took no joy in meeting with the young man and informing him that unfortunately the current tradition is unsafe and cannot continue as is,” Rueda told the Tribune, adding that he wasn’t looking to make the department seem “like the Grinch.”

Rueda reported that the boy had a plan to light the torches in the evening and they would extinguish by themselves around two hours later.
“He does this every night and I guess everybody likes it,” said Rueda.
Unfortunately, there was no plan for supervision of the flame at the time. On Thursday, Rueda said the department would be issuing a 7-day permit to allow the condition to continue through Christmas, with a number of conditions including a limited time window, required supervision of the flames and an agreement that the torches are subject to inspection by the department.

“Generally open flame is probably the most risky situation because it provides a direct transmission if it contacts combustible materials,” said Rueda. “It’s direct transmission to basically an uncontrolled fire. It’s something we pay attention to and it’s one of the reasons that really even unsupervised candles in the home can be risky. They should never be left unattended.”

Rueda added that although there was fond support for the tradition, an open flame without supervision leaves a possibility a number of incidents to occur.

“Lots of bad things can happen,” said Rueda. “What if someone’s walking down the street, stumbles into it, gets the oil on them, they’re on fire? Somebody’s kids get involved in mischief and tip it over? There are just a lot of things that can result when those devices are not directly supervised.”

Rueda noted that although unique traditions are important to honor, the department ultimately seeks to provide a watchful eye in that mission.

“We pride ourselves on being part of the fabric of the community,” said Rueda. “We value tradition and preservation of the way of life here in San Marino, but when it comes to safety of the residents, we put that above all else.”