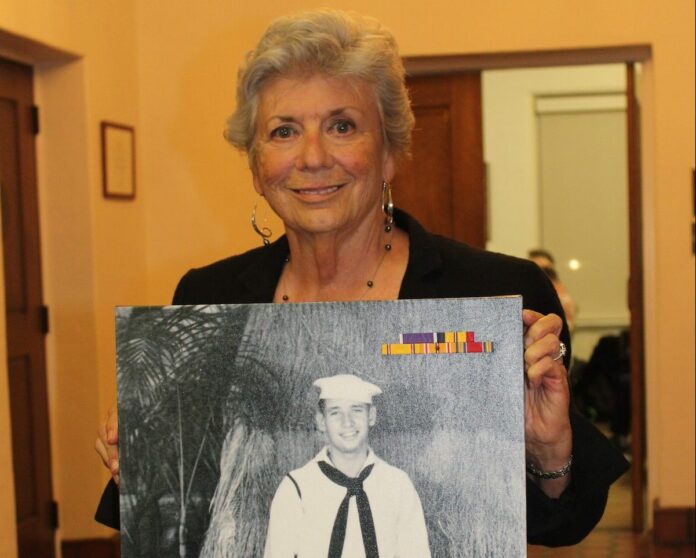 Two rather salacious stories grabbed the headlines in 2019, but the emotional journey of John Albert Karli is the most noteworthy.

While nobody is in any hurry to see an increase in the names on San Marino’s Lacy Park War Memorial, what took place in early November—shortly after Veteran’s Day, according to the handiwork of Director of Parks and Public Works Michael Throne—is an acceptable alternative as the number of San Marinans who gave their lives defending our country quietly grew from 52 to 53.

After nearly 78 years, descendants of John Albert Karli can finally take respite in the knowledge that the former United States Navy First Class Seaman has been memorialized in the town where he was born. Karli was until recently buried in the National Memorial Cemetery of the Pacific in Hawaii among the other “unknown” servicemen who lost their lives aboard the USS Oklahoma on December 7, 1941. Closing a campaign that was launched by The Tribune back in May, Karli’s name was placed on the Lacy Park War Memorial in November.

Karli’s niece, Marilyn Long, of Lake Forest, was in attendance at the November 13 meeting of the San Marino City Council, where the official notice of her uncle’s inclusion on the memorial and approval of the funds needed to get it there were approved by a 5-0 vote. Throne explained the project to the council and the $3,000 to purchase new stones for the memorial. The money came out of a segregated fund that was created through extra donations to the War Memorial, which was dedicated on November 11, 2007.

Karli’s remains were identified through the Defense POW/MIA Accounting Agency and the Armed Forces Medical Examiner System. In February 2012, two family members—including Long—submitted DNA samples to a reference database as it had been determined that advances in forensic science and genealogical help from families—DNA testing—could make identifications possible.

Karli was born on the Huntington estate, according to his birth certificate, on June 25, 1922, the fifth child and only son of immigrant parents. His mother, Hildur Rudin, emigrated as an infant with her parents, from Sweden in 1884. His father, Albert Karli emigrated in 1901, at age 22 from Switzerland. Both became naturalized citizens of the United States in 1928, according to surviving relatives. John was born on the estate in 1922.

John Karli was a lifelong resident of the San Marino and Pasadena area. He attended school in San Marino from kindergarten through the third grade. After the family moved to Pasadena in 1930, he attended McKinley school through the 8th grade, eventually graduating from Muir High School in June 1940.

The very day after his 18th birthday, John Karli went to the Naval Recruiting Station in Los Angeles, filling out his enlistment papers with the US Navy as his career choice and signing up for six years of service.

On July 12, 1940 Apprentice Seaman John Albert Karli reported to the Naval Training Station in San Diego, where he successfully completed his training on September 19, 1940. He was then transferred to the Naval Air Station in San Pedro before further transfer to the USS Oklahoma, a Nevada-class battleship.

He reported for duty aboard the USS Oklahoma on October 5, 1940, and advanced in rank to Seaman Second Class by mid-November. In June 1941, John advanced to the rank of Seaman First Class.

The USS Oklahoma arrived in Honolulu on December 6, 1940—one year and one day prior to the fateful Japanese attack on Pearl Harbor. On December 7, 1941, the USS Oklahoma sustained numerous torpedo hits. The ship quickly capsized, and 429 Sailors and Marines lost their lives.

His last letter home was written to his parents on a Thanksgiving Day, 1941 menu from the USS Oklahoma.

On December 20, 1941, a telegram arrived at the Karli residence, informing them that their son, John Albert Karli, Seaman First Class, US Navy, was missing in the performance of his duty and in the service of his country.

In mid-February, a second telegram arrived, telling the family that “after exhaustive search it has been found impossible to locate your son, John Albert Karli, Seaman First Class, US Navy and he has therefore been officially declared to have lost his life in the service of his country.”

He was posthumously awarded the Purple Heart in December 1943 and later received the World War II Victory Medal and the American Defense Service Medal.

John Albert Karli is honored at the Courts of the Missing in the National Memorial Cemetery of the Pacific—the Punchbowl—and the USS Oklahoma Memorial on Ford Island in Honolulu.

And now, quite appropriately, in Lacy Park.

Despite Sensationalistic Happenings, Stories of Goodwill And Great Achievement Top Look Back at Most Important Stories of 2019. For a complete list of the Tribune’s Top 19 of ’19 pick-up a copy of the San Marino Tribune’s 12.17.19 print edition.