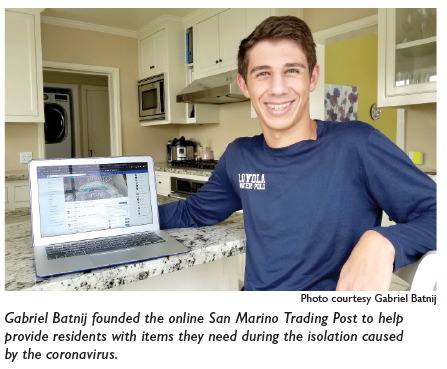 With his online classes ending earlier in the day and no swim practice to follow, Loyola High School sophomore Gabriel Batnij, like perhaps all students these days, found himself with a little extra time on his hands. What he chose to do with those hours was anything but common.
“I thought it would be a good idea to start this group to unify people in San Marino with all my newfound time,” he said.
“This group” is the San Marino Trading Post, a Facebook page he created to provide for those in need of, well, just about anything during the COVID-19 emergency.
“We went to the market one day to get a few packets of yeast, and they only had a 2-pound bag, enough to make bread for half of the city,” Batnij explained. “Nobody needs that much yeast. That’s when I came up with the idea for the Trading Post: a place where people could offer what they had too much of and ask for things they needed.”
The group was born the evening of March 17 and has quickly grown to almost 600 members.
“I actually signed up for a Facebook account in order to start the group,” Batnij said. “Twenty people joined in the first few hours and, thanks to some networking, over 150 people joined in the first 24 hours. People are still inviting their friends to join.”
Eggs, oranges and avocadoes have been swapped online, as have suggestions and advice, and a local pharmacist has offered tips for keeping an efficient medicine cabinet during the pandemic.
“In our first few days, we connected a no-touch thermometer with a doctor in town, a local business offered disinfecting supplies to an immunocompromised resident, and many San Marinans shared books, toys and food with each other,” Batnij said. “One resident even unloaded the 15 dozen eggs she had been forced to buy as a minimum purchase.”
“Give something, ask for something, borrow something” is the description authored by Batnij on the Facebook page. “Is there something you need? Ask for it. Is there something you have too much of because the gallon size was all that was left? Share it. Is there something you want to give away while you are cleaning out your child’s room? Offer it.”
Batnij has adorned the page with a chalk sidewalk drawing that declares “Community Over Corona” and is replete with a rainbow, which has quickly become a symbol of hope for young people across the globe.
“This group seems to have fulfilled a need for San Marino residents that can continue past the coronavirus crisis,” Batnij said, “so I plan to keep this group active after the COVID-19 crisis is over, to help San Marinans keep connecting with each other.”
The son of Joyce and Adli Batnij attended Carver and Valentine elementary schools and Huntington Middle School before entering Loyola, where he is a member of the water polo and swim teams. He is also a member of San Marino Boy Scout Troop 359 and is working toward the rank of Eagle. The Trading Post alone possibly contains enough clout to qualify Batnij for his wings.
Yeast makes bread rise, and Batnij in his way has helped elevate San Marino’s sense of community.
“I’m really glad that this group I started to give away our excess yeast became something that might have helped save a life, or at least made our lives a little brighter,” Batnij said.