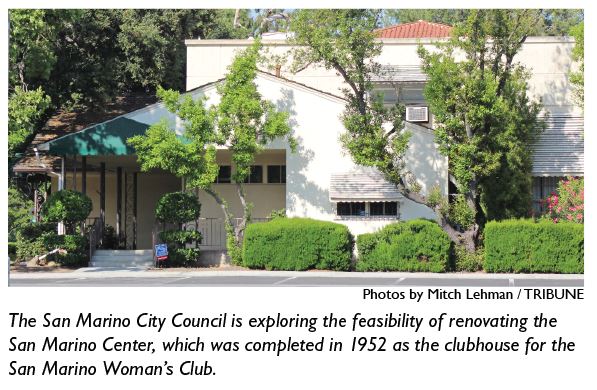 The San Marino City Council is considering a major renovation plan for the San Marino Center, the building located at 1800 Huntington Drive that for the majority of its existence was called the San Marino Woman’s Club.
If eventually approved, the project would cost approximately $4 million, according to City Manager Marcella Marlowe. She said that the council could take the next steps at one of its upcoming meetings, which are scheduled for Friday, May 29, and Friday, June 5.
“All the signs point to us moving forward,” Marlowe said.
The city has received conceptual drawings of the proposed modifications and will host a town hall meeting if the council decides to move forward with the project. The council would then vote to award the design plan at its July 8 meeting. Marlowe estimated that the city could put the project out for bid as early as this December.
“One silver lining of COVID-19 is that it is optimal to push forward with capital projects,” she said. “Construction projects can be built cheaper, quicker or both.”
One of the goals is to have the finished product resemble the Crowell Public Library, which sits directly to the east of the San Marino Center.
“There is not a lot of mystery as to what the outside will look like,” said Marlowe. “Since we used the library as our guide, there is not a lot of wiggle room.”
The San Marino Center can accommodate up to 300 people and is available to rent for weddings, birthdays, anniversaries and other special events. The facility has three main rooms: an auditorium, dining room and the Fireside Room, which is used for smaller meetings. The facility also includes an industrial kitchen.
San Marino City Club holds the majority of its meetings in the San Marino Center and the building is also used for a weekly Bridge game. The San Marino Chamber of Commerce also uses an office on the premises.
The San Marino Woman’s Club was founded on June 8, 1936, and used a room at San Marino Police headquarters to hold its first meetings. Efforts to build a dedicated clubhouse intensified following World War II and, in 1951, the building project was approved. Club funds of $57,000 were supplemented by a loan of $35,000 and work started in June. The San Marino Woman’s Club held its first meeting in the new clubhouse in April, 1952. In 2005 the clubhouse was sold to the City of San Marino.
“This is pretty exciting,” said Marlowe. “We will maintain the ability for community organizations to rent it out and we also envision it as a new home for the Recreation Department. It will be nice to have a true civic center.”