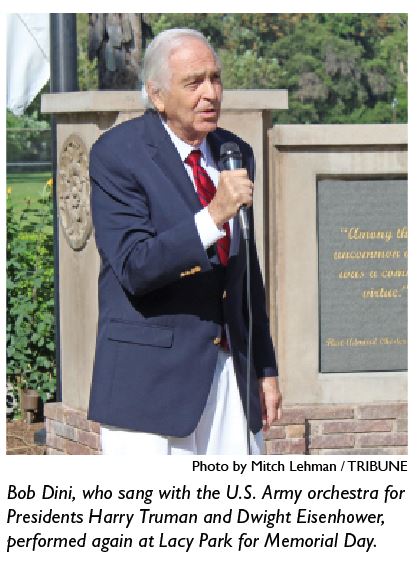 A large holiday crowd flocked to Lacy Park on Monday afternoon, but earlier it was eerily quiet as the daily contingent of walkers and joggers enjoyed a sparkling morning.
Sadly missing was the city’s annual acknowledgment of Memorial Day, though a virtual version was available for viewing by the legions of residents who have made it an annual ritual to honor the 53 San Marinans who gave their lives on America’s battlefields as well as the town’s veterans who assemble to honor their fallen compatriots.
Several of those who spoke visited the park last week and presented a socially distanced message, including San Marino Firefighter-Paramedic Dave Tannehill, who gave the keynote address. No stranger to San Marino or Lacy Park, Tannehill — a 15-year veteran of the SMFD — equated his military service as a member of the U.S. Navy with his chosen trade.
“We are ready to act when called upon,” said Tannehill. “Those of us who served in the military can relate to this. We place our bodies and our futures between danger and those we protect. This is particularly poignant as we remember those who sacrificed all and gave their lives in service to others.”
Tannehill reflected on his brother John, who was paralyzed in Vietnam while serving in the U.S. Army and later died of cancer.
“I always looked up to him,” said Tannehill, as his voice trailed off.
Tannehill entered the Navy “to do something I could be proud of,” and spoke about “camaraderie born of adversity.” He served on the USS Downes, a destroyer, which he reported has since been sunk and transformed into a reef. But it was there that he became a shipboard firefighter and also the equivalent of an EMT. A firefighter acquaintance of Tannehill encouraged him to join the fire service, and the rest is history. Tannehill explained the challenges of responding to medical calls during the COVID-19 era. 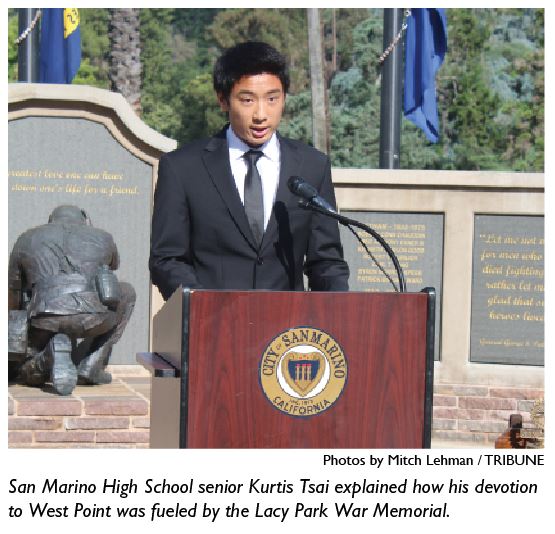 “We have a duty to respond,” Tannehill said. “There is little we can do except respond.” He mentioned Fire Chief Mario Rueda’s estimation that responding to calls these days can be more stressful than racing into a burning building, but “like in the military, we are trained to take calculated risks.”
“I want to be the first person through that door,” Tannehill said. “I am blessed to do so.”
He explained that Memorial Day honors “the very finest of what we have to offer.”
“We dedicate this day to our fallen heroes,” Tannehill concluded. “Let us never forget them or their sacrifice to our great country. We are grateful.”
Kurtis Tsai, a senior at San Marino High School who will attend West Point later this summer, explained how his devotion to the U.S. Military Academy was piqued by the very War Memorial at which he spoke.
“As a kid, my parents would take me to Lacy Park,” Tsai said. “Every time I would pass the then-newly built War Memorial, I thought of the extraordinary courage and fortitude that the men and women displayed on this memorial possessed, to lay their lives on the line for our country. I thought of the people that they influenced and the lives that they had changed for the better. And today, on Memorial Day, we honor and remember courageous military men and women who have made the ultimate sacrifice.”
Tsai also explained how the memorial plaque to San Marino native Gen. George Patton influenced his decision to apply to West Point, which is Patton’s alma mater. 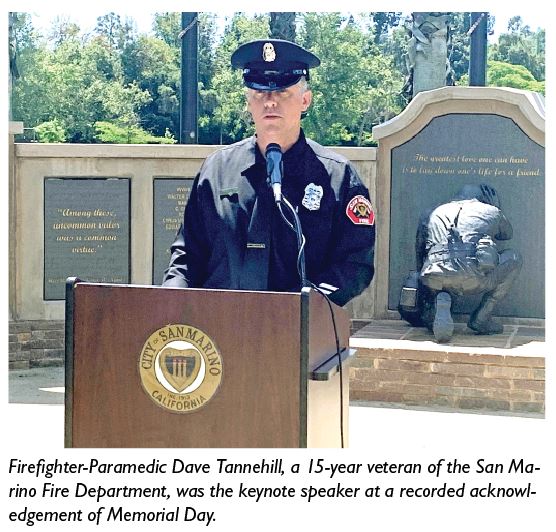 “I am honored to join San Marino’s rich military history,” Tsai said. “It is no miracle that San Marino has had so many of its citizens join the military. This city has been so incredibly supportive of the military community. San Marino has always displayed great patriotism with its July 4 celebration, Flag Day at our local elementary schools, today’s Memorial Day event and many other events.”
Another native of San Marino is Los Angeles County Supervisor Kathryn Barger, who contributed a video presentation to the ceremony.
“I have beautiful memories of Memorial Day, when this community reaffirms our commitment to honor the men and women who have laid down their lives serving our country,” said Barger. “I know San Marino residents will find meaningful ways to pay tribute to our service members who made the ultimate sacrifice for our freedom.”
Congresswoman Judy Chu said, “We remember those who gave up their future for the sake of ours, and we get to say to them now what we did not get the chance to say to them then — ‘Thank you.” Chu also paid homage to her father, who served in World War II.
“We thank the men and women who gave up everything,” said Chu. “Their sacrifices will never be forgotten. ”
State Assemblyman Ed Chau and state Sen. Anthony Portantino also acknowledged the sacrifice of America’s soldiers.
“It is so important that we respect and remember the men and women who answered the call and never came back,” said Portantino.
Chau also acknowledged the nation’s first responders and front-line workers for their service and pointed out that California contributes more men and women to military service than any other state.
San Marino Mayor Gretchen Shepherd Romey said one of the city’s best qualities is its legacy of military service.
“What we have in common is greater than what divides us,” Shepherd Romey said.
The Rev. Jessica Vaughan Lower of San Marino Community Church presented the invocation and benediction, San Marino resident Bob Dini sang the national anthem and other patriotic songs, and this reporter served as emcee.
In order to compensate for the virtual ceremony, the city is considering a Veterans Day acknowledgement in November.