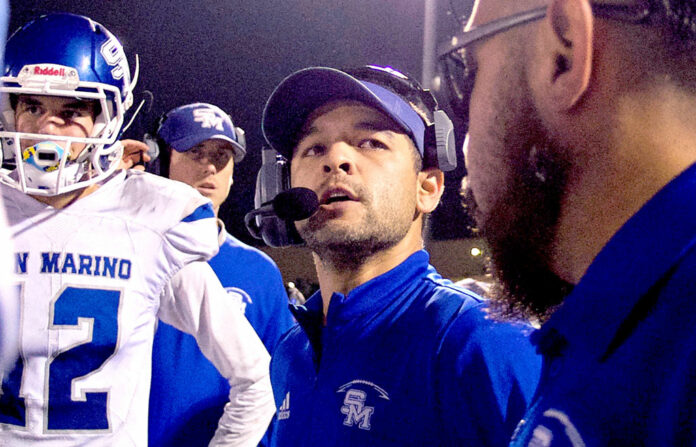 San Marino High School head football coach Justin Mesa claims he paid no attention to the blizzard of rumors that swirled through the prep athletics community ahead of last week’s announcement that games in Mesa’s sport will begin in January.
You simply have to believe him, based on his response when a few of the proposed options — the ones that figured in those rumors — were explained to him recently.
“I really didn’t pay attention,” Mesa said. “I figured the energy I would have expended thinking about anything that wasn’t sure to come to fruition would just be wasted.”

It’s a good thing, because California Interscholastic Federation officials zigged while followers of high school athletics were left zagging when a modified two-season slate was revealed at a news conference on July 20. The plan calls for some sports to begin in December.
Mesa said he is pleased the Titans will be able to play a full 10-game schedule, barring any further spikes in COVID-19 cases that could shelve the campaign. The pandemic prompted the CIF’s maneuvering.
Mesa was preparing for a coach’s meeting this past Monday, but took a little time to comment.
“I applaud their efforts,” said Mesa. “There are going to be some challenges for athletes in the spring season, but football really wasn’t affected. We are going to have a 10-game season and I see just a few challenges. It will give everyone a chance to play. But basically, I am just happy there is a decision.”
The CIF’s new calendar provides that athletics in the upcoming academic year will proceed with a modified format, postponing the beginning of the traditional fall season to December, with several sports being shuffled between seasons. The revised calendar sets the last day for regional or state football playoffs as April 17, 2021. The last day for all other rescheduled fall sports will be sometime between March 20 and April 17. Winter sports, such as basketball, will be woven into spring sports, with regional or state playoffs ending June 19.
The typical athletic year contains three individual seasons, but the CIF chose to reduce the number to two and move some of the individual sports to accommodate the new arrangement. The fall season will now include football, field hockey, gymnastics, boys’ and girls’ volleyball, and boys’ and girls’ water polo.
The new spring lineup will feature baseball, softball, boys’ and girls’ basketball, badminton, boys’ and girls’ golf, boys’ and girls’ soccer, boys’ and girls’ tennis, boys’ and girls’ swimming, boys’ and girls’ track and field and boys’ and girls’ wrestling. The spring season will begin in March with playoffs slated to conclude as late as June.
Heading into the announcement, many had believed that the CIF would adopt a traditional yet truncated slate following the three-season format, but formatted into abbreviated two-month seasons. The CIF eventually chose to allow athletes to enjoy longer individual seasons, though that luxury could come at a high cost as many student-athletes may be forced to make tough decisions due to the change. With basketball moving from winter to spring, many softball and baseball players will now be forced to make a decision about which sport to play.
“That is going to be a challenge for some of our student-athletes who will have to make a decision between two sports,” said Mesa.
Mesa said the next hurdle is to pull together a schedule.
“I am looking forward to figuring out when we can all get together,” Mesa said. “We will have to continue with distance football and virtual workouts. Hopefully, we will be able to get together in November for in-person practices.”
Mesa created a series of intrasquad competitions that allowed teammates to face off against one another.
“We really worked hard as a coaching staff to keep the team engaged,” Mesa said. “All during the quarantine we have been very clear about what we wanted the program to look like.”
The Titans are scheduled to travel to Crescenta Valley on Friday, Jan. 8, at 7 p.m. and will play 10 consecutive weeks.
“We have a ways to go, but at least we now know what the year and the season will look like,” said Mesa, who will be entering his second season at the helm. “I give a lot of credit to our players and the remainder of the coaching staff, who have worked very hard. Now we have a plan and I am really looking forward to the season.”