At the time, it was one of the most anticipated matches in all of high school wrestling: San Marino junior Luka Wick against Jesse Vasquez, a senior from Excelsior Charter School for the CIF Masters championship at 145 pounds.
The contest was actually a rematch from a week before, when Vasquez scored a reversal on Wick with less than a second left to break a tie and claim a 6-4 victory in the CIF individual title bout.
Among other reasons, that bout was memorable because administrators on the scene at Brea Olinda High School had altered the order of the competition and saved the matchup between the state’s two top wrestlers in that weight class for the final bout of the evening. Websites beamed the proceedings around the globe, to the delight of the sport’s aficionados and college recruiters.
“I wanted to stop him from being a four-time high school state champion,” Wick remembered this past week.
But the reprise was disappointing on several levels. As the two competitors scrambled for position early in the first period, Wick’s knee twisted awkwardly as he tried to spin behind his opponent. Wick immediately stopped wrestling as San Marino’s coaching staff sprinted onto the mat. Vasquez was given the victory and Masters title, while Wick’s injury ended his season.
“I was going one way and my opponent yanked my ankle the opposite direction, causing my knee to blow out,” Wick explained.
Wick had suffered a torn anterior cruciate ligament and medial collateral ligament.
“I was told four months of no wrestling,” he said. “I did not need surgery but then I started wrestling again five months after the injury and blew it out again.”
Wick finally did have surgery on Aug. 26 and will be on the shelf for another six months.
But that depends on one’s definition of “on the shelf.” Wick has continued his intense training regimen for the day he can return to the mat. Since he is fielding offers from the most elite college wrestling programs in the nation, conventional wisdom might dictate he pass up the high school grappling campaign. Thankfully, little about Luka Wick is conventional.
“When I can start again I will, of course, be staying at San Marino to wrestle for Coach Eddie Aguirre,” Wick said.
Prior to his injury, Wick was basically unchallenged at the Rio Hondo League finals, pinning his way through the weight class for his family’s 11th title. His older brothers Zander and Evan — 2016 graduates of SMHS — won four league titles apiece before heading to the University of Wisconsin on wrestling scholarships. Luka Wick is being recruited by “any school that has a wrestling team,” according to a coach. 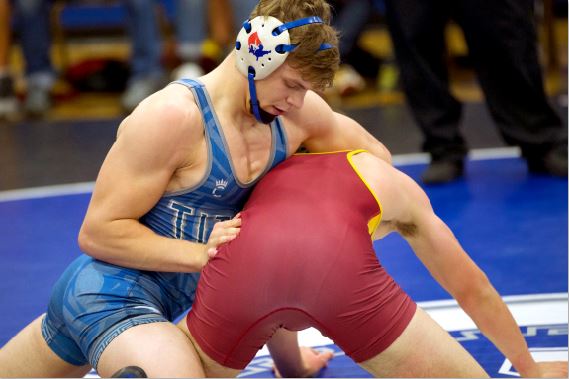 “I’m not sure what my best choices are yet because the COVID-19 pandemic has delayed all college visits,” Wick said, but he has identified Minnesota, Ohio State, Michigan, Nebraska, the U.S. Naval Academy, Pittsburgh, North Dakota State and Cal Poly as possible destinations, though others are also interested.
If there are no complications, Wick should be able to make it to the mat in time to add to the family’s overflowing trophy case. Six months from surgery would take Wick to the end of February and the senior actually gets a favorable break from the schedule makers. As a result of the COVID-19 lockdown, the CIF has shuffled wrestling to the spring season with a first-contest date of March 5. If he is able to win that fourth individual Rio Hondo League championship and make it an even dozen for the Wick family, he’ll go to the CIF championships that begin on Friday, May 28.
The only missing element will be Vasquez, who — without Wick standing in his way — was able to win his fourth state title and moved on to Arizona State to wrestle for the Sun Devils.
Stay tuned.