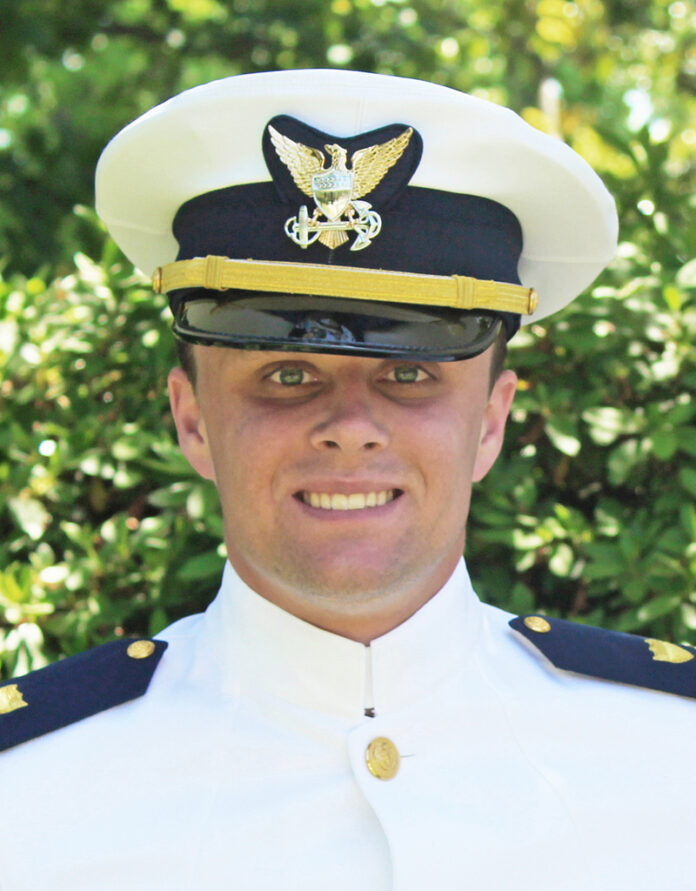 Four San Marino residents have graduated from the United States Coast Guard Academy and have received their deployments.
Charles “Chip” Crowley graduated from San Marino High School in 2015 and the United States Coast Guard in 2019 and has advanced to the rank of lieutenant junior grade. An accomplished athlete at SMHS, Crowley continued his success at Coast Guard, where he was a four-year member of the Bears football program, earning several team, all-league and all-region honors as a wide receiver, punter and kick returner and was chosen to serve as team captain in 2018.
Crowley graduated from the Coast Guard Academy with a degree in government and is currently stationed as a deck officer on the Coast Guard Cutter Seneca, which is based in Norfolk, Virginia. In April, Crowley is headed to Patrol Forces Southwest Asia, where he will serve as an executive officer for a 110-foot patrol boat conducting naval support activity based in Manama, Bahrain.
Coast Guard football coach Bill George spent 21 years at the helm before retiring after the 2019 season. Crowley’s accomplishments are still fresh in his mind.

“I remember taking photos on the first day of his junior year and I remember thinking to myself, ‘These guys don’t realize it, but we have the potential to have an outstanding season this year, but it will be a lot about the captains,’” George said. “We had a tremendous year and Chip’s performance as captain was phenomenal. I credit his leadership for our 7-3 record and win on ESPN over our rival, the Merchant Marine Academy. I knew a lot of that season was going to rest on Chip’s shoulders and he did so many things for us.”
Crowley has a similar recollection of the Academy.
“I look back fondly on my time at the Coast Guard Academy,” Crowley said. “While a service academy certainly comes with its unique set of challenges, getting to play college football with my brother Patrick was an opportunity I wouldn’t trade for anything. The academy also provided me with a fulfilling career after graduation that has exposed me to parts of the world that I never would have seen otherwise.”
Chip and Patrick are the sons of Carolyn and Jon Crowley of San Marino.
Patrick Crowley graduated from San Marino High School in 2016 and the United States Coast Guard in 2020. Crowley excelled at football and baseball at SMHS and was a key member of the Titans’ 2015 football squad that won the Rio Hondo League, CIF and south region titles while advancing to the state championship game. At Coast Guard, he was a four-year starter at defensive back, where he intercepted 13 passes, made 252 tackles and received several awards. Patrick also graduated from the Coast Guard Academy with a degree in government and is stationed as a deck officer on the United States Coast Guard Cutter Sitkinak, based in Portland, Maine.
“Pat is such a tough kid,” George said. “We had a streak where we won 12 of 15 games that was one of the longest ever at the academy. That is a testament to Pat, who played hurt all the time and never once complained. You had to pry it out of him. What never ceased to amaze me about Pat, he always ended the conversation with the words ‘thank you.’ Patrick taught me that and I changed my whole philosophy because of him.”
Crowley said he was “grateful” for the opportunities he received at the Coast Guard.
“I thank Coach George and all of the educators and officers at the academy for an amazing experience,” he said.
A 2016 graduate of San Marino High School, Arthur Wicke won four Rio Hondo League tennis championships and was twice a member of CIF title teams for the Titans as well. At the Coast Guard Academy, Wicke played three years of tennis and was chosen to serve as captain for his senior season, though that campaign was paused in March because of the COVID-19 pandemic.
Wicke graduated from the Coast Guard Academy with a degree in civil engineering and is stationed in Charleston, South Carolina, aboard the Coast Guard National Security Cutter James as a deck officer.
“Arthur was one of the hardest-working tennis players I have ever coached,” said Jordon Smith, who came to the Coast Guard Academy during Wicke’s sophomore year. “He cared more about the team’s successes than his own personal successes on the tennis court, and that was a big factor as to why he was named team captain last year. He improved so much and earned a starting spot his last two years by working hard on his weaknesses and becoming a more complete player. His transformation on the doubles court was one of the most impressive things I’ve ever seen coaching. He helped win a ton of matches for us with his singles and doubles play. He never complained or made excuses and that had a tremendous impact on our tennis program. We certainly miss his intensity on the court.”
Wicke said the academy was “an interesting place.”
“Seeing how an individual develops through everything you learn and challenging experiences you go through is definitely rewarding,” he said. “It is also frustrating being there sometimes because of all the demands you have to balance, but overall, I believe it’s the best college experience a young adult can have”
Arthur and Mark are the sons of Karen and Bob Wicke of San Marino.
Arthur’s brother Mark Wicke also graduated from San Marino High School in 2016 and the United States Coast Guard in 2020. A three-sport athlete at SMHS, Wicke played football, basketball and baseball for the Titans and was also a standout performer for the Titans’ 2015 squad that won the Rio Hondo League, CIF and south region titles while advancing to the state championship game. He also played football at the Coast Guard Academy and received numerous team, all-league and all-area awards as a linebacker. Wicke was selected to serve as a captain for the 2019 squad. Wicke, who graduated with a degree in mechanical engineering, is stationed in Charleston, South Carolina, aboard the Coast Guard National Security Cutter Hamilton as a deck officer.  With the Hamilton in port, Wicke is currently on loan to the Stratton based in Alameda, California. A highlight of Wicke’s short tenure on active duty was guiding the ship through the Panama Canal.
“One of the things that struck me about Mark happened during the spring of his senior year,” George said. “We had a player who had played in the NFL come and speak to the team. After he spoke, “Mark asked him how a player gets over all of the challenges he faces … [which was] a question that I needed 21 years to comprehend.”
He has a tremendous grasp on reading people, and on the field, he played banged up all the time. We won a lot of close games and it was usually because of our defense.”
Said Mark: “I met great friends there, and it prepared me well for my job. I miss it.”