San Marino High School head coach Justin Mesa won’t believe the football season has arrived until he sees the opening kickoff sailing through the twilight sky above Titan Stadium this Friday evening at 7 p.m.
And who could blame him. Since its last game in November 2019, the sport has seen so many stops and starts it should have been accompanied by the yellow flag that flies over NASCAR races to indicate a delay in the action.
But that could all end and the Titans will begin an abbreviated schedule when Burbank’s John Burroughs High School comes calling for Friday’s season-opener at SMHS.
It will certainly be the first San Marino football game ever contested in the month of March, but Mesa has waited so long for the COVID storm to subside that he would agree to just about any stipulation to allow his squad to play.
“The kids are really excited to play,” said Mesa. “They have a high energy level right now and who can blame them. After being off the field for a year and a half, we still have a long road ahead of us. But the guys have developed this ‘us against the world’ attitude that has really brought them together. They are having a good time and that is what you are looking for.” 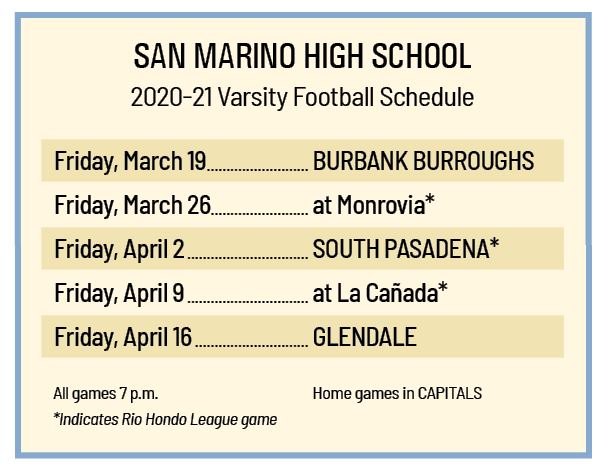 Mesa is also looking for some more players. Because of the delay in starting the season, many student-athletes left football for other sports in the belief that football wasn’t going to be played this school year. More than a dozen went to the baseball diamond in belief that sport had a better chance of getting off the ground. Even Mesa had his doubts.
“I thought the season would eventually be canceled, but we never approached it like that,” Mesa said. “I was always holding out hope. At times, it seemed like we didn’t have a realistic chance, but I was stuck in preparation mode.”
In June 2020, the CIF announced a revised athletic schedule which called for football season to begin in early January 2021, but holiday-induced spikes in COVID cases quickly squashed those plans. While Mesa was having his doubts, a Feb. 19 text message from director of athletics David Irie informed him that the Los Angeles County Department of Public Health had loosened restrictions and the season was back on.
“The kids had experienced so many ups and downs and had lost hope at one point,” Mesa said. “We have lost a lot of players to other sports, but the kids that stuck it out and the kids that are committed to football are really excited.”
About 40 players remain and the Titans hope to cobble together both a varsity and frosh-soph squad if opposing teams have similar numbers. With the abbreviated lead time, Mesa has re-committed the program to safety.
“We are going to teach everything in a safe manner,” Mesa said. “The last thing we wanted to do was go out and have a ton of scrimmage periods. But when we do scrimmage, we are going to do it the right way.”
Several of the remaining Titans are doing things “the right way,” chief among them is senior Billy Daves.

“We have a lot of players who are committed, but Billy is our most committed,” said Mesa of the tight end and defensive specialist. “I cannot remember the last team event he has missed. He has an unwavering commitment and Billy has also improved as a football player. I mention him first as I think he should be rewarded for what he brings to the team.”
Senior lineman Nick Derrick passed on transferring to baseball and instead stuck with his gridiron family.
“That was an unbelievable hard decision these young men had to make,” said Mesa. “Nick is a very physical impact player who does so many things for this program.”
Senior Glover Talt is also making an impact on the squad.

“Glover is also very committed and we are looking for big things from him,” said Mesa.
Senior Sam Fu is coming back from a significant shoulder injury and will contribute as an offensive lineman and linebacker.
“Sam is also very committed,” said Mesa. “He maintained a great attitude when we were in our lowest days and felt we might never play a game. Our offensive line likes to call themselves ‘the hogs’ and Sam has been a crucial part of that. He also understands the system really well.”
Senior Nick Singhal was named the team’s most valuable player when the squad last assembled for their 2019 end-of-the-season banquet. He will be key to the Titans’ fortunes on both sides of the ball, especially as a bruising running back.
“We will be a run-first team and then we will figure out who we are from there,” Mesa said.
Senior Matthew Karapetyan fits nicely into that philosophy as a slot receiver and erstwhile running back and defensive standout.

“I am really proud of Matthew,” Mesa added. “He has undergone a big-time maturation process and will be a key to this team. He has really developed his skills and has made big improvements in his game. He will be important in catching the ball for us.”
If Karapetyan is catching the football, it was most likely thrown by junior quarterback Niko Mavridis.
“Niko is playing really good football,” said Mesa. “He has an excellent understanding of the offense and he takes coaching really well. We can coach Niko hard and he takes it well because he is all about getting better. Niko will also be important to us as a defensive back.”
Junior Andrew Hornberger made the switch to baseball but quickly returned to football, where he will line up at wide receiver and nickel back.
“Andrew gives it his very best on every single play,” Mesa reported.
Junior Michael Prappas plays the same positions as Hornberger and is also a key contributor.
Michael is really coming on,” said Mesa. “He is a football player through and through.”
Ryan Singhal, Nick’s younger brother, will also be key to San Marino’s fortunes as a two-way starter.
“He has excellent skills, bit physical and natural,” said Mesa of the tight end and H-back.
When many football fans last saw him, Mesa was addressing the Titans in the north end zone at Santa Ana’s Segerstrom High School following San Marino’s 2019 first-round CIF Division 10 playoff loss to Orange High School. Mesa had battled what might have been San Marino High School’s most difficult pre-Rio Hondo League schedule in the history of the football program as well as a short takeover window following the retirement of Mike Hobbie. The Titans started that campaign 1-6, but rallied to finish second and qualify for the postseason. He has similar high goals for 2021.
“To win a Rio Hondo League championship,” Mesa said in answering that very question. “We are going to play three Rio Hondo League teams and we’re not sure if anyone is going to lay claim to a championship, but it’s important to play hard and try to win every game. But I just love the experience because of the energy. Everyone who is out there really wants to be there. It’s a short season, but we are not short on energy.”