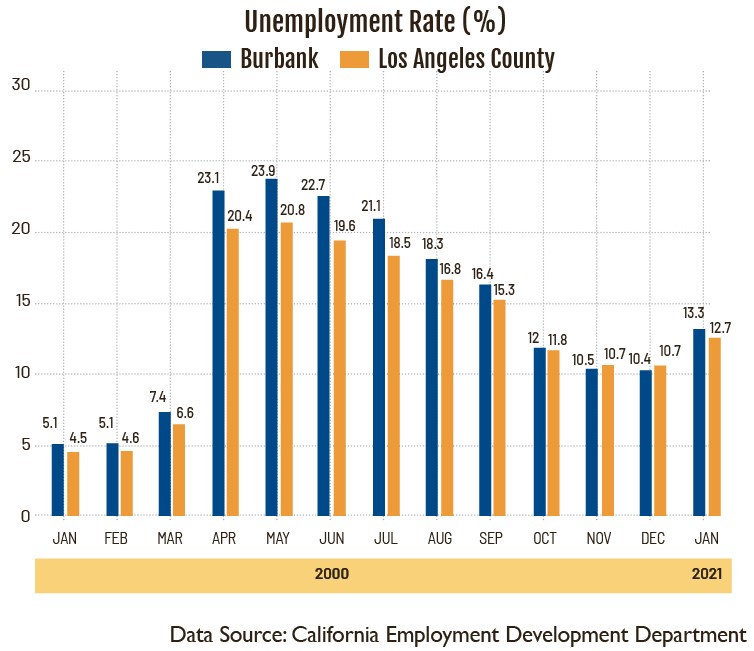 Burbank’s representative in the California State Legislature said issues with the Employment Development Department continue, with the agency grappling with hundreds of thousands of claims.
More than 900,000 claimants waited more than 21 days to receive their first payment or disqualification notice during the week of March 18, according to the most recent EDD data, a figure that has remained fairly steady since late January. The vast majority of those claims were stalled because a claimant needed to submit evidence of their eligibility.
State Assemblywoman Laura Friedman, whose district includes Burbank, said her office has been trying to help constituents navigate the unemployment insurance process, but added that legislators don’t have the kind of immediate control over the EDD like a City Council might have over a municipal department.
Still, Friedman admits she is frustrated that residents haven’t been able to get timely responses from the EDD. She said recently that she has five employees — who were not originally trained to field unemployment claims — working on more than 1,200 unemployment insurance cases.
“We need to modernize these agencies and make that a focus,” Friedman said. “People can’t go for months without getting the benefits they need to survive. We’ve been here for a year and we have constituents who have exhausted their savings, they’ve exhausted their credit. … We have shut their businesses down [and] we have to have the responsibility to give them support.”
The EDD has made some improvements, Friedman added. Last year, the department added electronic identification verification and hired more staff. But she would still like to see more reforms. Friedman pointed to a California State Assembly bill she co-authored that would require the EDD to offer a direct deposit option to claimants.

JANUARY UNEMPLOYMENT ROSE
The unemployment rate in Burbank saw a major increase in January, according to newly released data, coinciding with renewed industry restrictions that have since been rolled back.
The California Employment Development Department recently reported that local unemployment rose from 10.4% in December to 13.3% in January. It represented a 31% increase in the number of unemployed workers, from 5,800 to 7,600. About 1,200 fewer residents reported working that month, putting the city’s total employment at 49,200.
The increase in Burbank’s unemployment rate was the highest one-month jump the city had seen since the pandemic began. The rate has been steadily falling since May, though it has yet to reach its pre-pandemic level of 5.1%.
Burbank’s employment rate also again surpassed the county’s in January, as it historically has. Los Angeles County experienced a jump in its unemployment rate from 10.7% to 12.7% in January, representing nearly 105,000 job losses. Like Burbank, January marked the county’s first major increase in the figure since March.
Since the preliminary data was collected in mid-January, it does not reflect the reversal of restrictive state and county health orders, which were implemented in response to rising coronavirus cases and hospitalizations.
Officials have rolled back those health orders since late January. Indoor dining recently resumed in many California counties, including L.A., at 25% restaurant capacity. Movie theaters, museums, gyms and other locations have reopened with similar restrictions, while retail stores had their capacity caps increased to 50%.
A data release for February will likely capture some earlier rollbacks, such as the return of outdoor dining, when the EDD publishes in the information later this month.
Statewide, the EDD reported, unemployment dropped slightly from 9.3% in December to 9% in January. But 70,000 fewer workers were employed.
The leisure and hospitality industry — which includes museums, restaurants and independent writers and artists — felt the greatest impact in January, losing about 70,600 jobs statewide. The field has reported having nearly 800,000 fewer jobs compared to January 2020. The manufacturing, construction, and education and health services industries saw less dramatic, but still significant, job losses.
The motion picture and sound recording industry also saw a 4.7% decrease in jobs from December to January in L.A. County.
Conversely, trade, transportation and utility jobs — including retail employment — topped the list for month-over growth in January, representing an increase of about 13,700 statewide. But in L.A. County, the industry also saw losses, with the number of jobs falling by about 3.1%.
The department’s unemployment data was not seasonally adjusted, meaning it did not account for regular changes in employment that occur during holiday seasons, school breaks and other expected periods.