Thefts, Other Crime Fell in February 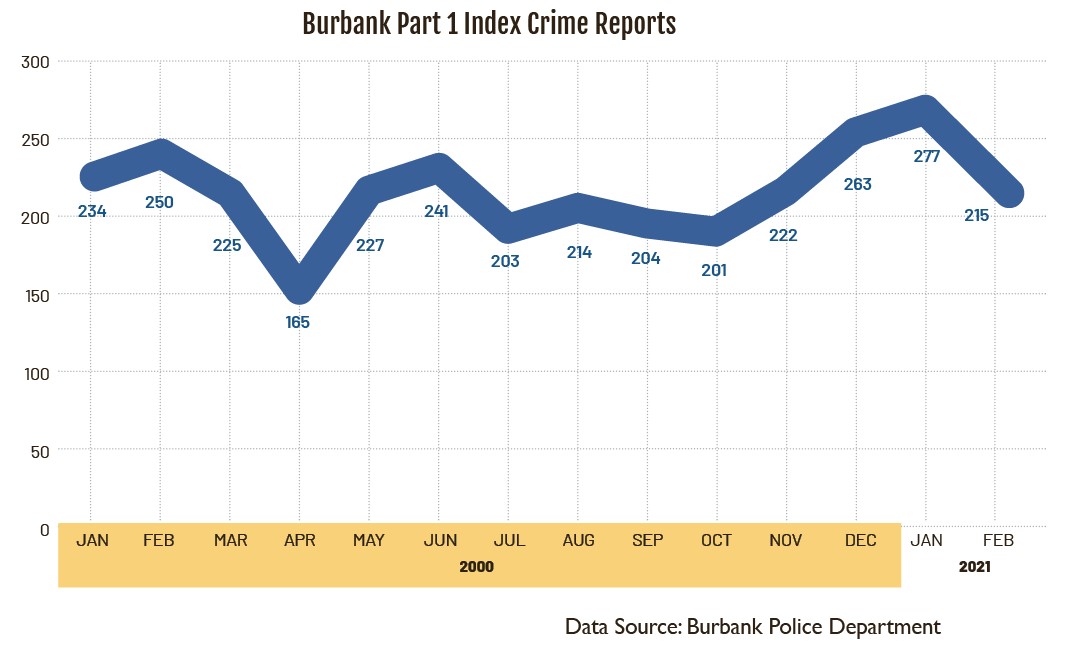 Reports for major crimes in Burbank dropped about 22.4% from January to February, according to recently released data from the Burbank Police Department.
The overall drop in Part 1 “index crimes” — which include an aggregate of incident types tracked to gauge a city’s crime statistics — from 277 in January to 215 in February reflected a less dramatic decrease in theft reports between the two months, from 189 to 164. The number of reports for auto thefts, burglaries and violent crimes also fell.
February’s report total was the lowest for the month since February 2018, when there were 198 incident reports.

However, because of a relatively high number of Part 1 index crime reports this January, the first two months of this year saw a higher report total compared to the same period for previous years. For example, compared to the 492 Part 1 index crimes reported through this February, there were 484 reports through February 2020 and 477 reports through February 2019.
Catalytic converter thefts have also remained an issue, with 38 reports in January and 36 in February, said Sgt. Emil Brimway of the BPD. Thieves seek to take the vehicle devices, which control emissions and contain highly valuable metals, and sell them — often for hundreds of dollars each, according to the New York Times. They can also cost the owner $1,000 or more to replace.
The BPD, which has issued advisories regarding the thefts for years, has recommended implementing security lighting and surveillance cameras to protect vehicles. Catalytic converters can also be etched with the car’s vehicle identification number, allowing police to track the device if it is stolen.
From January to February, auto theft reports decreased from 33 to 25 while robberies fell from nine to four. There were 10 aggravated assaults reported in February, up from nine in January, and one reported rape, up from zero.