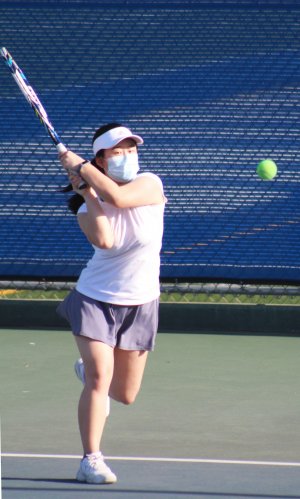 It may have taken place seven months after its intended date, but San Marino and Arcadia High schools faced off last week in their traditional season-opening girls’ tennis match. The Apaches defeated the Lady Titans by a final score of 13-5 in the non-league matchup between two teams who are regularly among the best in the entire state. San Marino’s doubles combinations of Selina Wu & Valerie Kuo, Elaine Wu & Anna Moller and Isabelle Kang & Katie Lui were able to score against Arcadia, with Selina Wu & Kuo and Elaine Wu & Moller winning two of their three matches. Kang & Lui were victorious in one match while taking a second to tiebreaker, accounting for the Lady Titans’ points.
Selene Yung, Camdyn Wu and Mandy Rivera battled hard in singles play, but the Apaches prevailed.
San Marino has an extended break in the schedule and doesn’t take to the court again until Tuesday, April 13, when the squad travels to La Cañada. The Lady Titans’ final remaining home match takes place on Tuesday, April 27, when South Pasadena visits at 3:30 p.m.