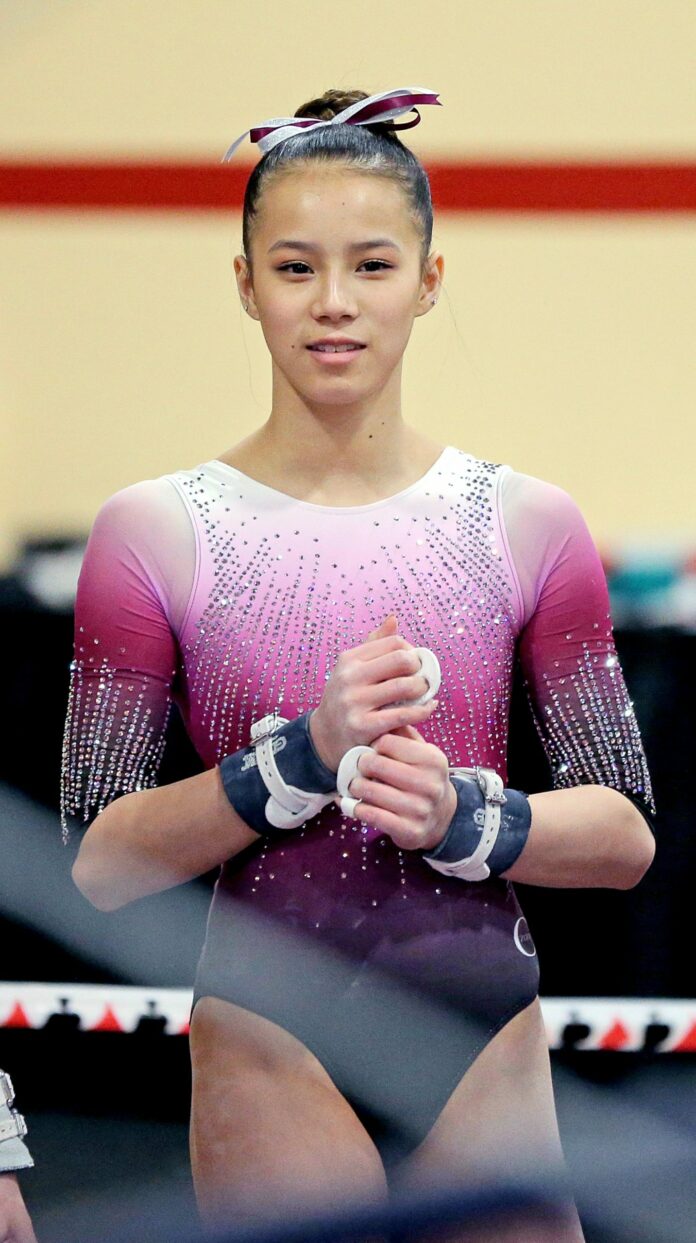 But it wasn’t the smooth path to the top that one might expect.

Caroline’s mom, Liz, had wanted Caroline to study ballet. Two years into ballet, Caroline’s dad, Peter, thought gymnastics would be a better fit. With reluctance, Liz took Caroline to a gymnastics class where Caroline immediately fell in love with the sport. Just a week into her newfound pursuit, the head coach at her gym pulled Caroline onto a team where she began to train competitively. Just 6 years old at the time, Caroline competed at Level 4 her first year before rapidly progressing.

In the sport of gymnastics, participants are placed into different “levels” based on their proficiency at several compulsory skills. A gymnast usually starts competing at Level 3, with Level 10 being the highest. Levels 9 and 10 are considered to be the most difficult levels.

Caroline’s coaches immediately saw potential and had her train for TOPS – Talent Opportunity Program – a talent search for gymnasts ages 7-10 that is conducted annually by USA Gymnastics, or USAG. Caroline endured several rounds of rigorous testing locally before she was asked to attend the National Training Camp in Huntsville, Texas. Formerly known as Karolyi Camp after legendary gymnastics coach Bela Karolyi, Caroline qualified to be a member of the national TOPS “B” team.

Because Caroline was on a fast track, she competed Level 9 at the age of 11, an accomplishment typically achieved by gymnasts in their teens. At one point, Caroline qualified for the Western championships, where she was scouted personally by United States national team coach and former Russian Olympian Valeri Liukin to train at the national training camp.

There are four events in gymnastics – the vault, uneven bars, beam and floor exercise. As a gymnast progresses through the levels, the skills required for success become more difficult, with “10” the highest attainable score in each event. Therefore, the top all-around score in a competition would be a 40.0. In order to qualify to compete at state, a gymnast must have a minimum all-around score of 32.0 from any of the USAG-sanctioned meets that take place during a given season. Qualifications to compete at regional events requires a score of 34.0 or higher from state competition. Caroline is in Region 1, which is comprised of Arizona, Nevada, Utah and California. At this year’s regional, which was held in Phoenix, 256 Level 10 gymnasts competed.

Qualifying for nationals, where Caroline is competing this weekend, is even more difficult. Only the top seven gymnasts from each region qualify for the prestigious event. There are eight regions across the country and at nationals seven gymnasts have formed a Region 1 team that will compete against the other seven regional teams. Each gymnast will receive an individual score that will be tallied for a team score. There will be awards for each event and “all-around” awards for team and individual accomplishments. Typically, college coaches from around the country attend the national competition to scout future gymnasts. This year, due to COVID, some may livestream the event from their homes.

Although she doesn’t have a favorite event, Caroline was quite clear when explaining that what used to be her least favorite is now her best – the vault. She has always been a good tumbler, hence her proclivity in the vault and floor exercise.

Caroline currently trains at West Coast Elite Gymnastics in Arcadia under coaches Fernando Villa and Toni Angelova and said she finds herself to be “in the best place ever” with the best coaches.

A lifelong resident of San Marino, Caroline is currently a high school junior attending Connections Academy, an online program that works well due to her rigorous training schedule. Throughout the years, she has attended Valentine Elementary School, Huntington Middle School and spent her freshman year at San Marino High School. Her sister, Catherine, graduated from SMHS in 2019 and is currently concluding her sophomore year at the University of California, Irvine.  This summer, she is hoping to travel to Hawaii for the family’s annual holiday they were forced to skip last year. She is looking forward to her senior year and upon graduation in June 2022, she hopes to compete in a Division 1 gymnastics program in college. Hopefully, she will be attracting an offer this weekend.