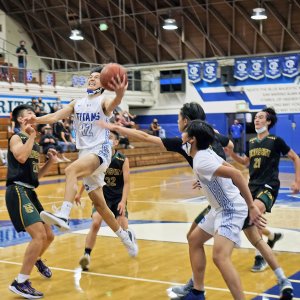 It was the first time San Marino High School’s boys’ varsity basketball squad had set foot in South Pasadena’s recently refurbished gymnasium but the intense desire to defeat their opponent was as old as the rivalry between the two schools, which has been burning for more than six decades. And in one of the more memorable contests between the Titans and Tigers, the hosts scored last to emerge with a 63-61 victory.

“Despite the bitter loss, we are so proud of our boys and their fighting spirit,” said head coach Mihail Papadopulos.
He will get no argument from anyone who was inside the newly well-lit gymnasium or viewed the proceedings on a livestream transmission. Trailing by a dozen points early in the fourth quarter, the Titans came roaring back and took a two-point lead with a minute to go before falling short.
“We just couldn’t overcome a couple of tough lapses down the stretch that ultimately gave South Pasadena the window that they needed to win the game,” said a thoughtful Papadopulos.
Senior Joey Fuerst paced the Titans with 20 points , Mason Lo and Kyle Yu scored 10 points apiece, and Xavier Duong played one of his better all-around games of the season while adding nine points. Sean O’Brien and Michael Azinge added six points apiece though Azinge was saddled by foul trouble for the majority of the contest.
“The game was a challenge from the start as whistles were flying left and right as the officials tried to control the pace of the game,” Papadopulos said. “Unfortunately, that impacted much of how we had been playing our rotations and we had to adjust.”
The loss dealt a blow to the Titans’ hopes for a league championship as San Marino dropped to 4-2, two full games behind pacesetter La Cañada, which is undefeated in Rio Hondo action.
“We definitely made a great comeback and we were in great position to finish it off, but sometimes it just doesn’t go your way,” Papadopulos concluded. “That shouldn’t take away from the effort and ultimately the gritty performance that our boys displayed. We will use this experience to continue to fuel us.”

Employing its most balanced offensive attack of the season and a solid team defense, San Marino High School’s varsity boys’ basketball team defeated Temple City last Wednesday night. Junior Michael Azinge paced the Titans with 15 points, 11 rebounds and a steal and was fortified by senior Sean O’Brien (14 points, eight rebounds, two steals), Joey Fuerst (13 points, eight rebounds, three steals) and Mason Lo, who found a hot hand with 13 points.
But it was a night where everyone shared the spotlight as Kyle Yu added six points and five rebounds, Truman Koch contributed five points, Xavier Duong scored two baskets while Duin Kim (three points), Jayden Hollomand and David Jiang (two points apiece) all participated in the fun as the team improved to 4-1 in the Rio Hondo League.
“It’s hard to describe our team; they just have a big heart, they like to get after it and they all really like each other,” Papadopulos said. “That’s an awesome combination for growth. With our group, we know we have some great senior leadership and our younger players continue to grow exponentially.”
Papadopulos credited O’Brien with providing “a surge of energy” when he drained four three-point shots in the first quarter before ceding to Lo. Azinge was also clutch, claiming five offensive rebounds.
“Miel was awesome on the boards tonight,” Papadopulos added. “He told us that he wanted to give 100% of an effort, and he did.”