Reutimann Gets On a Roll at Rotary 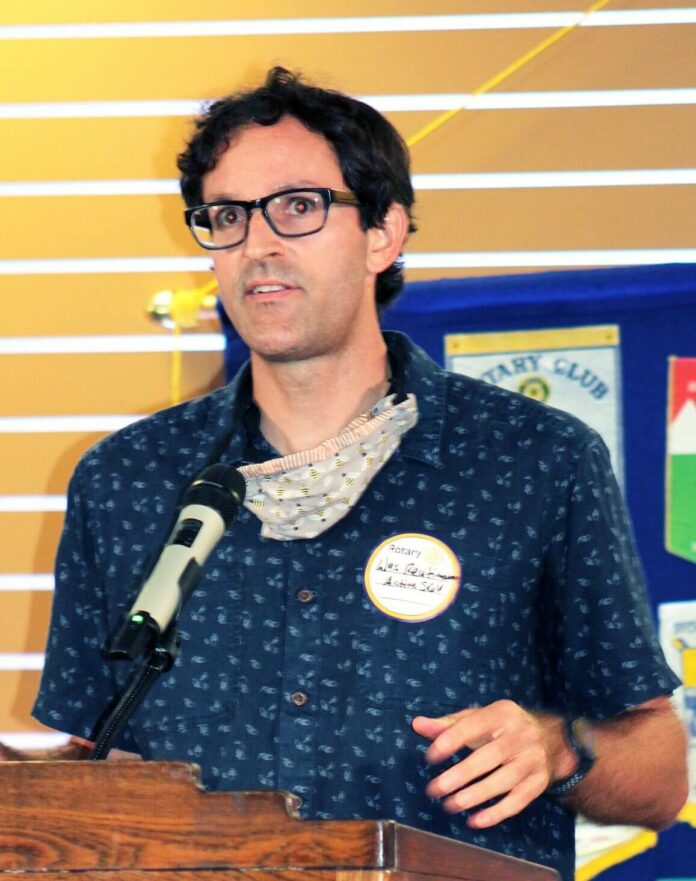 First published in the Sept. 16 print issue of the San Marino Tribune.

He was born and raised here and, last Thursday, Wes Reutimann returned to his hometown where he was the keynote speaker at the Rotary Club of San Marino’s weekly luncheon.
Reutimann attended San Marino schools beginning in kindergarten at Valentine Elementary School until his 1998 graduation from SMHS. He received his bachelor’s degree from Williams College with a double major in political science and German studies before heading to the University of Basel, Switzerland, where he received a master’s degree in advanced European studies.
All roads have since returned home for Reutimann, who has worked for the Los Angeles County Department of Public Health and Day One before he co-founded ActiveSGV in 2010.

“ActiveSGV is all about community events, open streets, transit improvements, green infrastructure and advocacy for a more sustainable, equitable and livable San Gabriel Valley,” said Reutimann in presenting the organization, which began as a Facebook page that was devoted to bicycling.
On Thursday, Reutimann discussed his goal for complete, green streets and sustainable mobility.
“Many of the 21st century’s most pressing challenges are connected to our streets,” Reutimann said. “Wide expanses of asphalt contribute to urban heat island impacts. Storm water that isn’t captured pollutes local waterways. Gas-powered cars and trucks are the leading source of greenhouse gas emissions in California and are responsible for over 50% of emissions statewide.”
Reutimann also pointed out that “addressing these issues at the local, state and national level will require changing a 70-plus year paradigm of designing streets for a single purpose — moving as many vehicles as possible — to a more nuanced approach that balances the diverse needs of a changing world.”
Using a parlance peppered with phrases such as stopping distances, speed tables, high-visibility crosswalks, pedestrian’s plazas and parklets, Reutimann used slides to illustrate how many communities in Southern California have worked to make towns appealing to bicyclists and pedestrians.
He mentioned that many cities in the region, including Santa Barbara, Laguna Beach, Claremont, El Monte, Canoga Park and Lancaster, are creating plans to maximize sustainability without sacrificing mobility.
Reutimann was speaking to dozens of San Marino residents who knew his late father, Walter, who owned the Mission Nursery for more than 40 years before he passed away in 2016.
An accomplished runner before he became an enthusiastic cyclist, Wes Reutimann set the freshman cross country record at Lacy Park and finished fifth in the state of California in 1997.
Reutimann founded the 626 Golden Streets program, which has temporarily shut down roadways to illustrate the possibilities for riders and walkers.
“The inaugural event in 2017 featured eight communities including South Pasadena, San Marino, East Pasadena, Arcadia, Monrovia, Duarte, Irwindale, and Azusa,” Reutimann explained. “We opened up 18 miles of streets for people to safely explore by foot, bike, skate or other rolling mode.”
Under the program, within San Marino and unincorporated Los Angeles County, the route was along the north side of Huntington Drive. Since then, there have been three other 626 Golden Streets events: Mission-to-Mission in 2019, which connected the historic San Gabriel and South Pasadena Mission Districts; Main Street Alhambra and SGV Streets and Treats, connecting the cities of El Monte and South El Monte for a festive fall holiday event; and Pride of the Valley Open Streets in Baldwin Park and Irwindale.
ActiveSGV is currently working on proposals to stage three more “open streets” events in 2022-23.
Reutimann and his wife, Kristin, have two sons, Jasper, 6, and Max, 3.