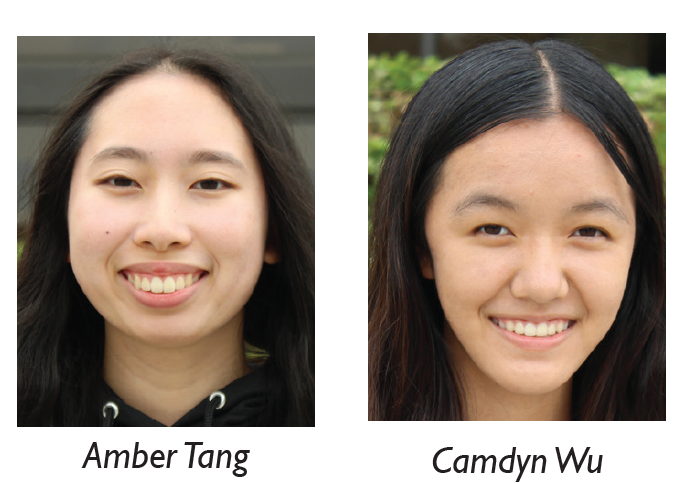 Amber Tang and Camdyn Wu, members of San Marino High School’s graduating Class of 2022, were among the more than 2,600 winners of National Merit scholarships financed by U.S. colleges and universities, it was announced last week.

Both will attend the University of Southern California in the fall, with Tang stating her probable career as medicine and Wu science and research.

At the height of the pandemic, Tang and Wu were joined by their SMHS classmate, Chelsea An, in beginning a charity called “Book My Vax,” which helped provide COVID-19 vaccinations to elderly citizens who were not able to successfully navigate websites that would result in their making an appointment for a vaccine.

Officials of each sponsor college selected their scholarship winners from among the finalists in the 2022 National Merit Scholarship Program who plan to attend their institution. These awards provide between $500 and $2,000 annually for up to four years of undergraduate study at the institution.

An additional group of scholars will be announced in July, bringing the number of college-sponsored Merit Scholarship recipients in the 2022 competition to about 4,000.

Sponsor colleges and universities include 82 private and 73 public institutions located in 42 states and the District of Columbia.

College-sponsored Merit Scholarship winners announced last week are a part of the distinguished group of about 7,500 high school seniors who will receive National Merit scholarships for college undergraduate study worth nearly $28 million.

Last fall, more than 16,000 semifinalists were named on a state-representational basis in numbers proportional to each state’s percentage of the national total of graduating high school seniors.

Semifinalists were the highest-scoring program entrants in each state and represented less than 1% of the nation’s seniors.

To compete for Merit Scholarship awards, semifinalists had to advance to the finalist level of the competition by fulfilling additional requirements. Each semifinalist was asked to submit a detailed scholarship application, which included writing an essay and providing information about extracurricular activities, awards and leadership positions.

Semifinalists also had to have an outstanding academic record, be endorsed and recommended by a high school official, and earn SAT or ACT scores that confirmed the qualifying test performance.

From the semifinalist group, more than 15,000 met requirements for finalist standing, and about half of the finalists will be Merit Scholarship winners in 2022.