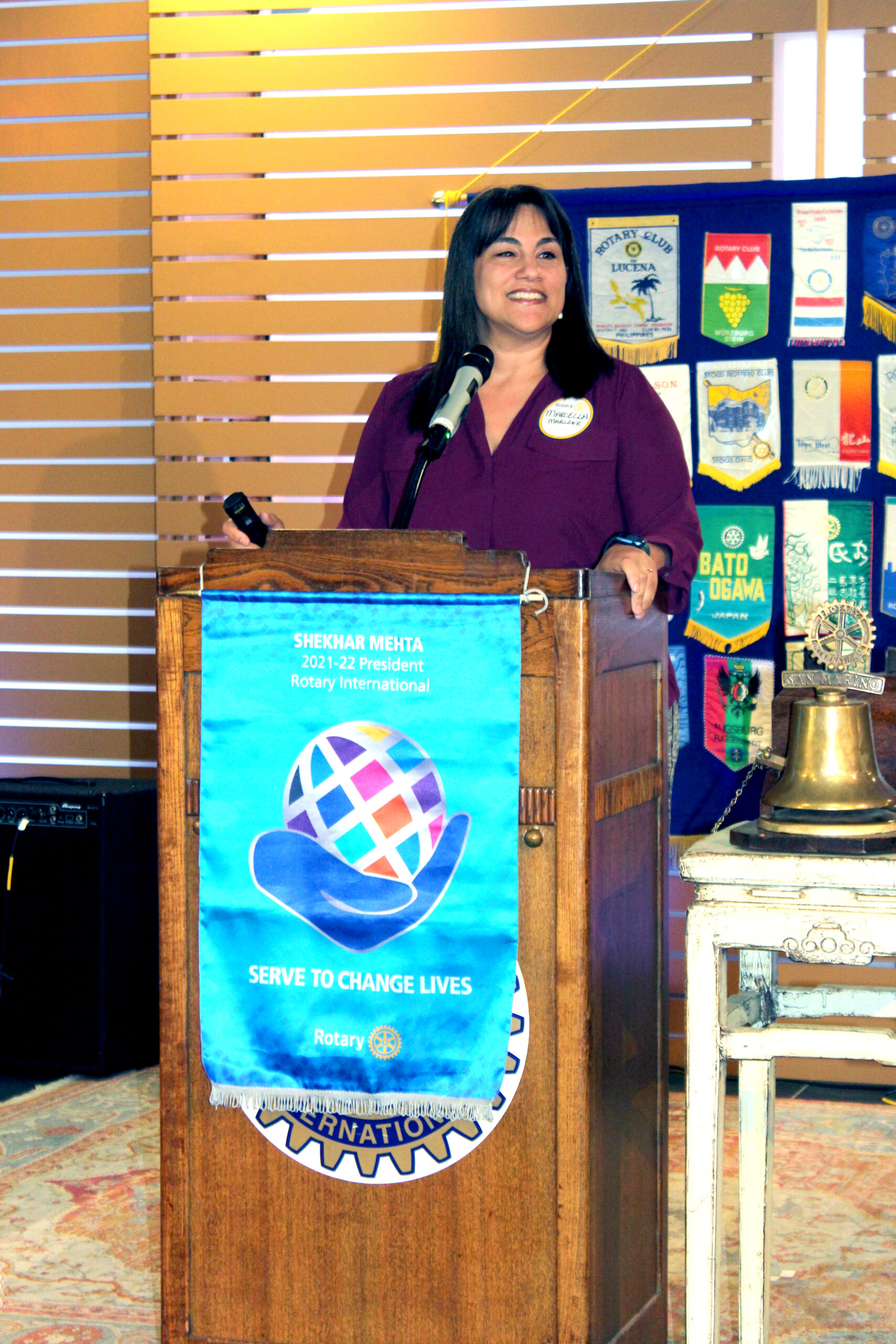 San Marino City Manager Marcella Marlowe began her address this past Thursday afternoon with a statement that she claimed was extremely rare.

“Nobody ever asks me to be louder,” she said as she began her address to the Rotary Club of San Marino in response to a few in the audience at San Marino Community Church asked her to speak louder. Her response elicited a roar of laughter.

During a portion of the meeting called “Craft Talks,” Marlowe was on hand to explain the nature of her profession as all club members are eventually asked to do.

Along with the city’s police and fire chiefs, Marlowe’s is one of the most public non-elected roles in San Marino and, even for those who are familiar with her extensive body of work, Thursday’s meeting offered the community a different perspective on the public official.

“If I would have to sum it up in just a few words, I would say that I am a Valley Girl who loves all things ‘USC,’” Marlowe said.

“I will also say that this community can be a little difficult to penetrate,” she said. “It can make it tough for an outsider and, after 4-1/2 years, I feel that I know about half the room.”

With two of her “bosses” in the room ­— City Council members Steve Talt and Steven Huang — Marlowe revealed to the club one of the reasons she has been reticent to appear before the club.

“Not long after I came to San Marino, I spoke at a city event and was told that I didn’t do a good job,” Marlowe recalled. “That is one of the reasons it has been so long since I have come back.”

Marlowe said she is an only child who was born without an intended name.

“My parents were under the belief for a number of non-scientific reasons that I was going to be a boy and they chose for me the name Matthew,” she said. “So, they settled for Marcella, which is the female form of the name Matthew.”

Marlowe said she is also passionate about Disneyland and costuming and displayed photos of her as a Star Wars stormtrooper and a Jedi Master with the stage name of Celeste Morne.

Marlowe paused her senior year at Calabasas High School and enrolled early at USC, where she immediately became a fan of the football team and its iconic gear, which she said she purchased for her entire family.

She received her degree in classical Greek civilization from USC in 2008 and displayed a photo of her and her mother, who received their college degrees on the same day in 2008. Marlowe fought back tears as she explained that her mother graduated with a degree in art from California State University, Northridge, on the same day she received a graduate degree.

Proving her affinity for costumes, Marlowe explained how she and her husband, Patrick, were married on Halloween.

“It was really funny,” she said. “Our friends were very decidedly in two different camps. Some were very upset people that we were going to make them wear a costume to our wedding, while others said, ‘you mean to tell me that you are getting married on Halloween and you are not going to make me wear a costume?’”

Marlowe has since received master’s and doctorate degrees in political science, while adding public law to her doctorate.

She holds an adjunct teaching appointment with the University of La Verne’s College of Business and Public Management, having also taught at USC’s Sol Price School of Public Policy as an adjunct associate professor.

Another milestone for Marlowe came when she spent her first day as San Marino’s city manager. She was just returning from maternity leave after giving birth to her son, Clark.