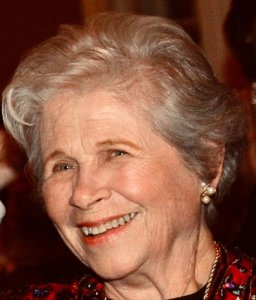 After a long and purposeful life, Marjorie Frances Stoll passed away on Nov. 6, 2021, in Northern California after residing there for the past six years in both Los Altos and Redwood City.

Marjorie was born March 8, 1924, in Urbana, Ill. She grew up in Chicago and studied art at the University of Illinois, which led to a lifelong passion for interior design. Her brave and adventurous spirit brought her to Southern California as a flight attendant for American Airlines in the 1940s which led her to enjoy traveling throughout her life.
She lived in Pasadena for 10 years where she was a real estate agent and broker. Marjorie later moved to San Marino where she enjoyed entertaining family and friends in her home of 60 years. Her gracious and friendly presence made everyone feel comfortable and no one felt like a stranger to her.

Her kindness and generosity led to her involvement in many philanthropic organizations such as the National Charity League and Philanthropic Educational Organization (PEO). As a woman of faith, she regularly attended Christian Woman’s Bible Study and enjoyed church services at Lake Avenue Church in Pasadena as well as Church of our Savior in San Gabriel.
She will be laid to rest in San Gabriel cemetery next to her husband Walter Evenden Stoll.

Marjorie was preceded in death by her parents Franklin David and Mary Estelle Hissong; her brother, John Raymond Hissong; her husband, Walter Evenden Stoll; and her beloved granddaughter Shannon Ferrell Taylor. She was a devoted and loving mother and sister.
She is survived by her brother Frank Richard Hissong of Des Plaines, Ill., and her children, Walter’s daughter Barbara Henry (Dwain), Charley Stoll (Nancy), Paul Denton, Susan Nunan (Larry), and Terry Merrick (Tom). She was a fun and generous grandmother and is survived by 10 grandchildren and four great-grandchildren. Services will be private.