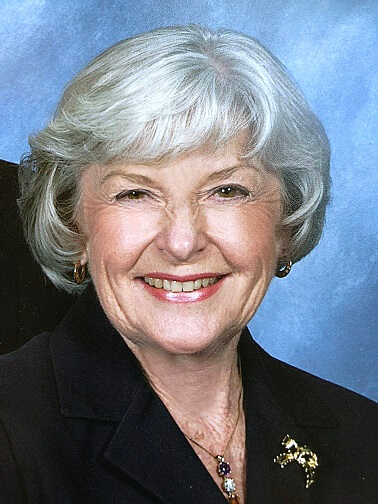 Sally Menefee Adams passed away peacefully at home in the presence of her family on Nov. 22, 2021. Sally was born to Ardinger and Mary Jane Menefee on May 4, 1938. A resident of San Marino for more than six decades, she was raised in their distinctive Tudor-style home on Twin Palms Drive. She was a graduate of Valentine Elementary, Huntington Junior High, and San Marino High School, Class of 1957. On May 1, 1965, Sally married her husband, Charles “Chuck” R. Adams at San Marino Community Church. Sally and her husband of 56 years lived in San Marino for more than 41 years where they raised their sons, Rick and Steve. Sally was an active volunteer and leader for various community organizations, including San Marino Little League Baseball, Boy Scout Troop 358, and the San Marino Community Church. Sally parlayed her volunteer work for Carver Elementary School into a 24-year career with the San Marino Unified School District. She devotedly served her community as the principal’s secretary at Carver, and then as the administrative assistant for instructional services. In 1998, Sally Adams was awarded the SMUSD’s classified employee of the year. In retirement, Sally enjoyed an active lifestyle around her grandchildren, the USC Trojans, and traveling with her husband. They visited all 50 states and more than 40 countries, including the Principality of San Marino. She supported Chuck’s volunteer activities with the Tournament of Roses, including many years on the queen and court committee. Sally was a cancer survivor of more than 10 years. Her boundless energy earned her the term of endearment, “Super Sally.” Sally is survived by her beloved husband Chuck, son Rick Adams (Jami) of Ladera Ranch, son Steve Adams (Michelle Paturel) of Yorba Linda, her grandchildren, Hanna, Haley, Sawyer, and Matthew, her sister, Jane M. Overall of Fullerton, and her three nephews, niece, and their families. She was preceded in death by her parents, Ardinger and Mary Jane Menefee, her parents-in-law, Alan C. and Florence M. Adams, brother-in-law Thomas Cooper Overall, sister-in-law Kathryn Adams, and many dear friends. A private, graveside service will be held at Forest Lawn, Glendale. Sally M. Adams has left a legacy of love, laughter, devotion, and dedication to her beloved family, to her friends, neighbors and to her hometown. In lieu of flowers, please contribute to the City of Hope Cancer Research Hospital.