The San Marino Design Review Committee continued an application for after-the-fact approval of a side yard wooden lattice fence with green mesh at 2260 Lorain Rd., located at the corner of Lorain Rd. and San Marino Ave., to its Feb. 1 meeting.

As part of the application, a proposal for a new steel sliding gate at the side yard was also continued. The new gate would, if approved, replace an existing gate.

“The fence that’s there was installed without permits and now the applicant is here to request permission to keep them and to also change the gate design on the house,” said Associate Planner Amanda Merlo at the committee’s Jan. 4 meeting. “The design is not compatible with the house and the wood fence location would not be consistent with others on the block.”

The property owner, Rita Yang, explained that the fence she installed re placed a wooden picket fence that was falling apart.

Her grandchildren’s security, she added, was her primary motivation. However, committee members commented that the lattice fence wouldn’t best serve that purpose.

“I’m confused as to why you chose a lattice as your design, because that provides very little privacy, where you have to put up a green [mesh] material that is, at this point, because [the hedges are] not solid, seen,” said Alternate Committee Member Judy Johnson-Brody.

She recommended that Yang should instead install a solid barrier without any material adhered to it.

DRC Chairperson Frank Hsu agreed. “A more solid material would be more appropriate for your need,” he stated.

Vice Chairperson William Dietrick reminded the committee of its standard in after-the-fact applications such as this one.

“Since this was not permitted, we have to consider this as a project that’s never been done before and I don’t think the fence would have been approved the first time around by this committee, the way that it looks now with a cloth on it,” he said.

Dietrick continued, “It looks like a construction project if you took the hedge out of the way. And we have to not consider the hedge at this point.”

“It does look haphazardly done,” he said of the existing fence.

The proposed gate design includes cast iron spears, scrollwork designs and half cast iron knuckles, which some committee members also found to be too ornamental.

Dietrick added, “[The gate] should be more consistent with a traditional style home and be a little more plain.”

Johnson-Brody agreed, noting “The gate should be something consistent with the style.”

The DRC unanimously approved an application for a new one and two story Colonial Revival house and detached garage.

“Winston is one of the beautiful streets in San Marino with diverse architectural style and beautiful trees,” said project architect Feng Xiao, stating that the house was designed to achieve symmetry and with sensitivity to neighborhood style and scale. 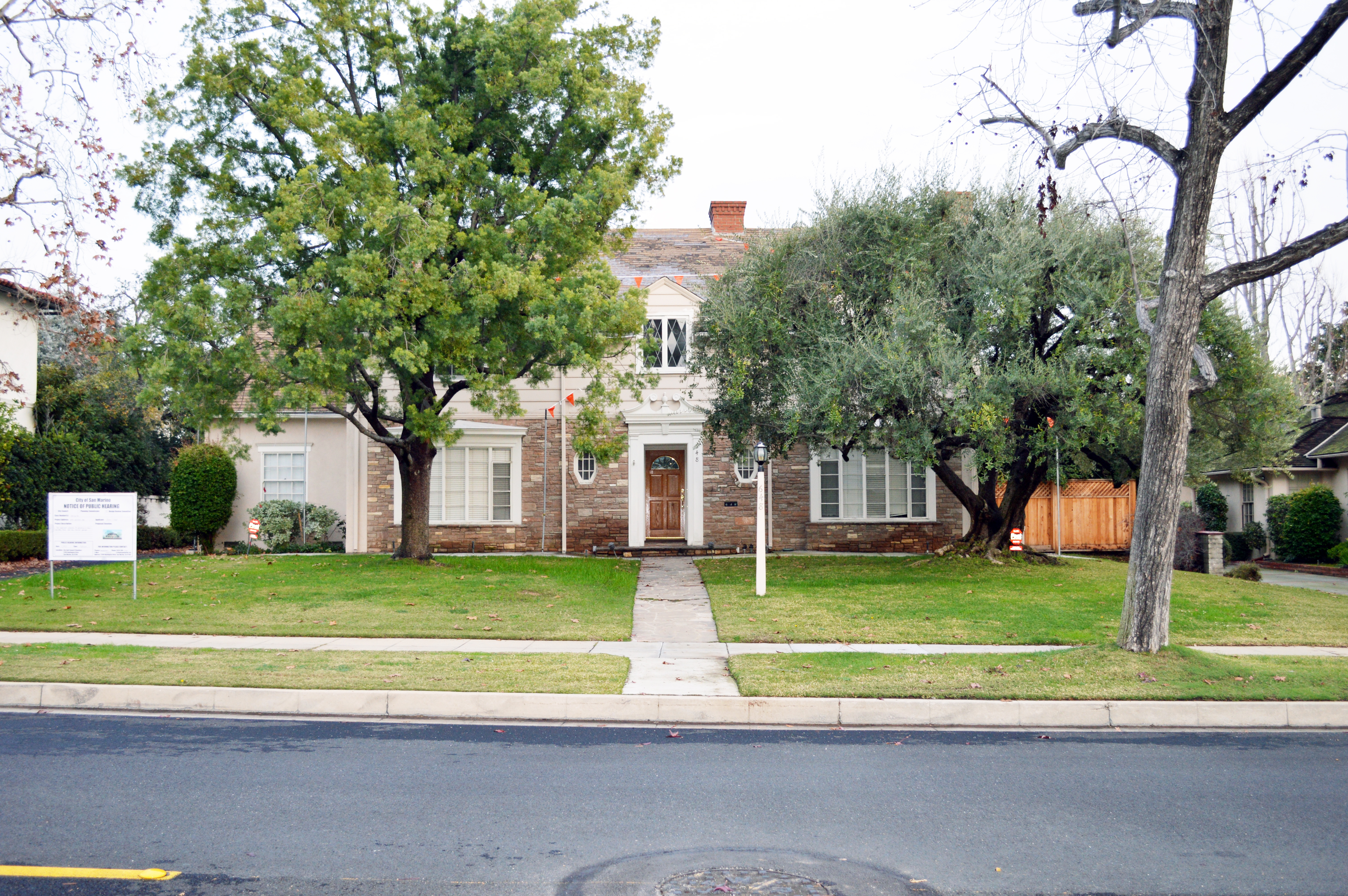 “We feel thankful for all of the neighbors’ input,” she added.

“I think this house is very balanced. And architectural styles and massing is very compatible with its neighbor and with itself,” he said. “Initially I had a concern with the color of the brick, but given that this existing house is more of a tan-ish color, I think it will go with the neighborhood.”

“The white brick probably works a little better with the color of the neighborhood,” explained Xiao. “That’s a pretty common construction technology here on the west coast,” she added, citing the benefit of better waterproofing.

“I think one of the things we strive for is homes that are developed in an architectural style that would be considered timeless for generations,” said Johnson-Brody.

She continued, “And I look at this project and I think you’ve done a fantastic job in not only building a home that will look timeless and tasteful, but very respectful of the neighboring homes with the setbacks on both sides.”

Dietrick also approved of the project, but cautioned Xiao that “you’re 13 square feet from the maximum livable space allowed, so be careful when you’re building.”

“I think the colors go very well together, especially looking at the other homes on the street. I do agree with what the applicant stated, that’s an area of San Marino where you do get more interesting looking houses,” Huang stated.

“I am becoming a fan of this product,” Dustin said of the weathered wood color Tilcor Steel Shake roofing material.

“Clearly, we need to still continue to make the condition that custom low ridge lines be done,” he added.

“With the low profile ridges, I think it looks great,” Dietrick agreed. “It’s safe. You don’t have to worry about fires.”

“I think there’s only two wood roofs on the entire street,” highlighted Johnson-Brody.

Hsu wrapped up the committee’s discussion.

“I think this product will work for this particular house given the configuration of the roof. The roofline is a little bit high up. It really would not be that visible,” he said.

The Fourth Was a Banner Day at Many Homes