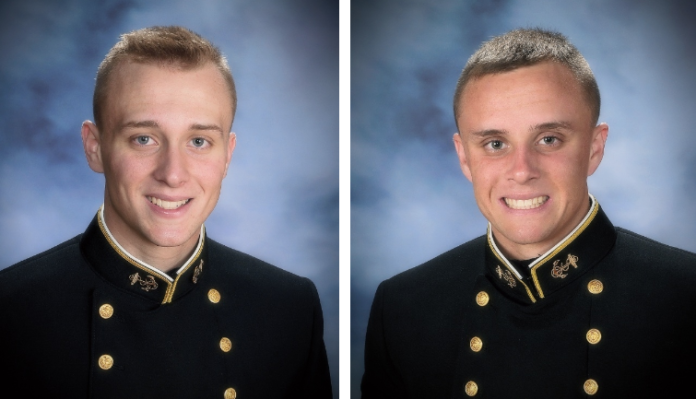 Probably more than typical, children, twins are taught to share at an early age—the requisite photos in identical outfits one example of a similarity most of them could do without.

San Marino’s Arthur and Mark Wicke no doubt fall into the same category, though one similarity that emerged a few months ago is more than welcome and admirable, as the sons of Karen and Bob Wicke were named captains of their college tennis (Arthur) and football (Mark) teams at the United States Coast Guard Academy for their senior years.

The 2016 graduates of San Marino High School already share another similarity as both have twice been named to their respective Academic All-Conference teams for the 11-member NEWMAC, the New England Women’s and Men’s Athletic Conference.

While at SMHS, Arthur Wicke was a two-time all-area doubles champion and twice won the CIF Division 2 championship. At the Coast Guard Academy, Arthur has played both singles and doubles and last year was selected to play in the International Tennis Association’s Northeast Regional Singles Tournament. He and his partner also won the Stonehill College Doubles Invitational, an honor that was followed by being named by his teammates as the the Bears’ captain for the 2019-20 school year.

“I was a little surprised about being named the only captain, but being the only senior on the team, I have the most experience both as a tennis player and cadet, so the decision made sense from that perspective,” said Arthur, who is majoring in Civil Engineering. “I am excited to be able to lead the team during my last year of competitive tennis.”

One person who is not surprised by Arthur’s captaincy is Melwin Pereira, Arthur’s coach at San Marino High School.

“Arthur is a very dedicated player and a hard worker,” said Pereira. “From the first day I met him when he was a freshman I saw good things about Arthur and that is the same today. I liked his enthusiasm and he is very passionate about the game. It is fun to watch him play. Arthur is and always has been a team player and I am not surprised at all that he is a captain.”

A Mechanical Engineering major (see, even twins can differ) Mark was a second team all-Rio Hondo League linebacker as a junior at SMHS before making the all-Rio Hondo League, all-Area and all-CIF squads as a senior when he was a captain and a member of the 2015 Titan squad that advanced to the State Small Schools championship game in Sacramento.

He has been a three-year starter at the Coast Guard Academy at strong safety and outside linebacker and will no doubt get plenty of playing time for the Bears this season.

“I am honored to have been voted as a captain by my teammates,” Mark Wicke said. “This team has so many people of high character, and I feel an obligation to do well on the faith and trust they’ve placed in me. I hope I can be a strong leader for our football team and a model for the core values of our academy.”

“Mark is a young man with a very serious approach to life who is strongly guided by his own principles,” Hobbie said. “Mark is admired by all those around him.”

Hobbie said he is “not at all surprised” that his former player was named a captain.

“Mark is an extremely hard worker,” Hobbie concluded. “He sets the example for what a coach wants and what a coach says and that is a very valuable attribute.”

A small clue to the Wickes’ success might have been revealed when the twins were named Prometheans by San Marino High School administrators, an honor given to few seniors shortly before graduation that acknowledges leadership.

Prometheus is known for stealing fire—then giving it to others—possibly the best prerequisite for a captain.