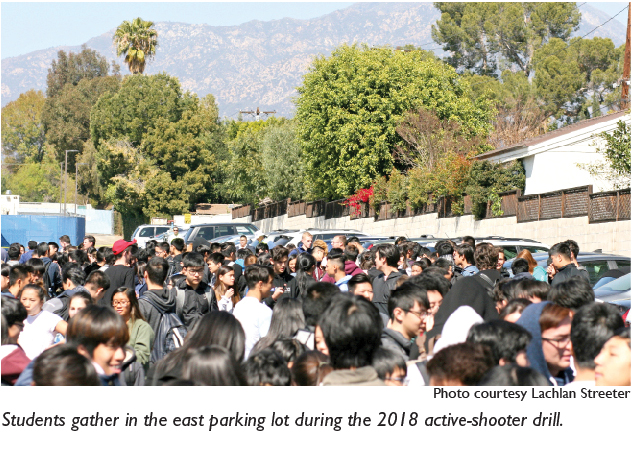 An active-shooter drill that was scheduled to be held at San Marino High School during a recent two-day span was abruptly postponed when the American Civil Liberties Union objected to the exercise.
The drill was scheduled to take place during time slots on a modified assembly schedule last Thursday and Friday, but was postponed before the start of school Thursday morning as the result of “a joint decision of the high school and district leadership teams,” according to San Marino Unified School District Superintendent Jeff Wilson.
The move was made after a one-hour phone conversation between SMHS Principal Issaic Gates and Sylvia Torres-Guillén, the ACLU’s California director of education equity. Torres-Guillén said that a San Marino parent informed her of the drill, which was to include the sound of gunfire in an effort to familiarize students and staff with conditions of a school shooting. Torres-Guillén cited what she said is “evidence-based research” that has shown

that active-shooter drills can traumatize students. Wilson said the district had received complaints from other parents as well.
“The ACLU has been doing a lot of work on this,” said Torres-Guillén. “These drills that include contact with law enforcement officials can create a great deal of trauma, especially among students of color.” She referenced a study published by Everytown for Gun Violence, which describes itself as “a movement of Americans working together to end gun violence and build safer communities” and claims that the drills can end up “scaring the individuals instead of better preparing them to respond in these kinds of situations.”
“Instead of school-hardening measures, we need to create spaces that are conducive to learning,” Torres-Guillén said. “We need to see how we can create an environment at schools that promotes learning and does not include oppression or fear. This falls squarely into the work we are doing. Making schools a better place that are sanctuaries of learning and education, not instilling fear or interfering with learning opportunities.”
The exercise was to begin Thursday with an informational assembly in the Neher Auditorium.
“We would talk about the ‘whys’ of the drill, details and statistics as well as the format,” Gates said this week. “It was also to provide an opportunity for students to ask questions.”
The drill was to take place during the same time period on Friday, and was to include the firing of approximately 12 rounds of blank ammunition over an 11-minute period from a firearm with a special adapter to further muffle the sound.
“The rounds were to be fired from four different locations on both sides of the campus,” said San Marino Police Chief John Incontro, who was involved in planning the drill. “The students would then be asked to come out of their classrooms, but the shooters were never in the students’ line of sight.” Students would then report back to the auditorium for another assembly.
“In case the students had additional questions,” said Gates. “We were going to go over the three basic messages of the drill, which are run, hide, fight. It was less a physical drill and more an opportunity to think through what we should do in this type of emergency. We need to be cognizant of our surroundings. What do we do when we hear these unfamiliar sounds? How do we barricade ourselves if we have to hide? What happens if we have to fight?
“By no means were we going to act that out, it was just a conversation,” he said. “The drill is also important because it prepares students and staff for an event that might happen off campus, or later, at college. It was very well scripted and well timed, and there were no surprises. It was less dramatic and more experimental.”
An active-shooter drill was last conducted on Feb. 28, 2018, and included a police officer dressed in black civilian clothing walking through campus while randomly firing blanks into the ground. Teachers had been instructed to keep their doors locked, and were tested when the shooter and several police officers knocked on doors with false pleas to open them. The team traveled through the quad and the breezeway firing blanks until, under the scenario, the shooter “committed suicide.” Meanwhile, members of SMHS’ Associated Student Body also knocked on doors to plead with teachers to open their doors, which they were urged not to do in the briefings. Students with fake injuries, including artificial blood, were placed throughout the campus as a diversion. 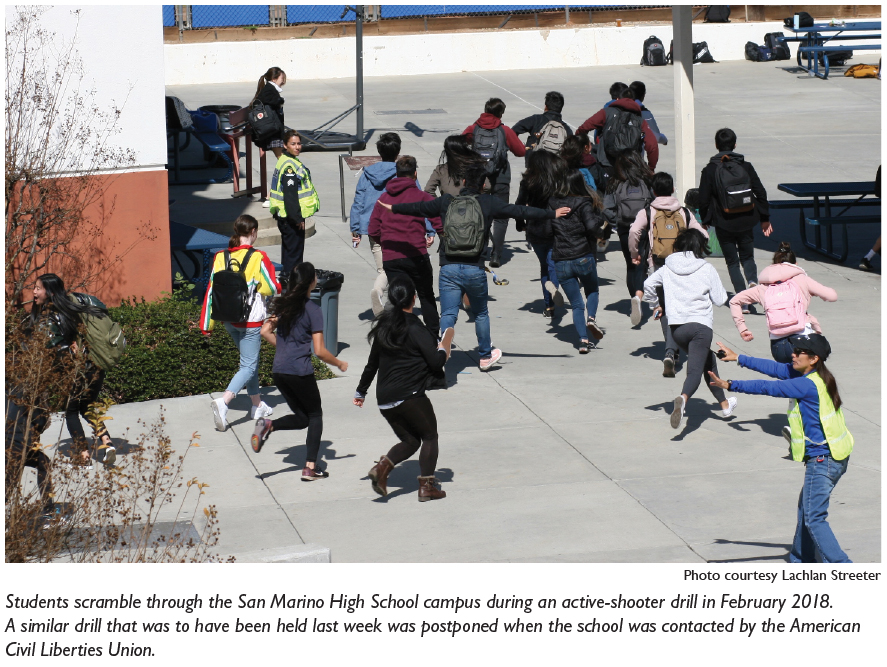 Incontro decided against those elements for last week’s proposed version.
“I didn’t want the officer dressed in black, the wounded students or the kids knocking on doors for this one,” Incontro said. “After the 2018 drill, I thought, ‘We don’t need this.’ I was really looking forward to seeing how the communication process worked, and that was important — very important. I have researched these drills through the Secret Service, and I felt that what they had planned was going to be a benefit to everyone: students, faculty, staff and the entire community. The most important thing we can do as a Police Department is to support the schools in what they want to do, and we look forward to working with them in the future.”
Incontro said he feels the drill is important and “the school as a whole is now less prepared.”
“The school felt that hearing the sound of gunfire was important and the students were going to be well aware of what was going to happen, nothing was going to happen that they wouldn’t know about,” Incontro said. “Just like we have fire drills and earthquake drills, they need to know what to do if there is a threat. Same as with a fire or an earthquake, stay away from the source. The drill doesn’t need to have gunfire, but walking through the process and procedure is very important. This is training for the Police Department, the Fire Department and the city, too.”
Incontro added that his son is a student at SMHS, “and I don’t want to put my son through anything that would be negative or traumatic.”
SMUSD Board of Education President C. Joseph Chang said he was fully informed of the events as they unfolded and agreed with the decision to postpone the drill.
“We knew that members of the public had concerns and we decided to stop,” Chang said. “We will try to find a better solution that can fit our community.”