HomeSportsUpdate Is a Mixed Bag for High School Athletes
Sports

Update Is a Mixed Bag for High School Athletes 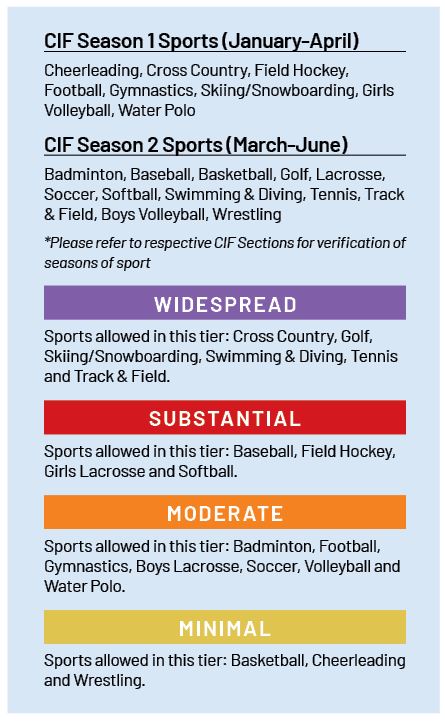 A recent directive from the California Department of Public Health leaves only fading hope for the playing of most high school sports during the 2020-21 school year, especially those scheduled for Season 1. Athletes, coaches, parents and administrators waited more than four months for the update on youth sports, and the news wasn’t good.
The directive, released last week, further delays sports competitions between teams until at least Jan. 25. When the California Interscholastic Sports Federation — the governing body for prep athletics in California — announced its revised schedule on July 20, fall sports were scheduled to begin as early as Dec. 19. Two weeks ago, the schedule was pushed back to Jan. 1. The CIF also canceled all Season 1 regional and state playoffs in an effort to hopefully provide more regular-season playing opportunities.
The return-to-competition date will be reassessed by Jan. 4. In the meantime, teams are forbidden to participate in tournaments held outside of California, as had been common during the pandemic.
David Irie, San Marino High School’s director of athletics, has continuously maintained a positive attitude throughout the pandemic and is still optimistic about providing an opportunity to play.
“By agreeing to eliminate regional and state playoffs, there is some flexibility in adjusting the fall, or Season 1, sports schedule,” said Irie. “The challenge will be our county moving out of the purple and red tiers [of California’s metric on test positivity and adjusted case rates for COVID-19].

“In addition, pushing the earliest start date to Jan. 25 makes sense, and I would guess it will be adjusted based on the data. The Rio Hondo League athletic directors met last week and discussed some of the adjustments we have to make moving forward in our athletic schedules.”
Schools are still allowed to continue to hold workouts under strict guidelines, and Irie said the training sessions will recommence after the holiday break, which began last Friday, with students returning to classes on Tuesday, Jan. 5.
Sports will be allowed based on a chart that follows California’s color-tiered metric. The purple tier, indicating a “widespread” infection rate, means there are more than seven daily cases per 100,000 population. The red tier, indicating a “substantial” infection rate, means there are between four and seven daily cases per 100,000 population.
The orange tier, indicating a “moderate” infection rate, means there are between one and 3.9 daily cases per 100,000 population. The yellow tier, indicating a “minimal” infection rate, is reached when there is less than one daily case per 100,000. According to data released by the Los Angeles County Department of Public Health on Dec. 15, the county had an infection rate of 26.9 positive cases per 100,000.
To begin the playing of football games, for example, which had been scheduled to start in early January, a county would need to be in the moderate, or orange, tier.
There is positive news, as outdoor sports such as tennis, golf, cross country, and track and field can be held if a county is in the purple tier. Sports allowed to be played in the red tier include baseball, field hockey and girls’ lacrosse. The state must be in the orange tier in order to begin competitions in football, badminton, gymnastics, boys’ lacrosse, soccer, volleyball and water polo. When and if the yellow tier is achieved, competitions will be expanded to include basketball, cheerleading and wrestling.
“We requested that all sports be conducted in the red tier and were hopeful that we would be allowed to proceed accordingly,” said Rob Wigod, the CIF Southern Section’s commissioner of athletics, in a press release that was distributed last week outlining the new guidelines. “While that is not the case today, I want to assure you that the dialogue will continue between the CIF and the California Department of Public Health to try to advocate for the return of education-based athletics as soon as that can happen in a healthy and safe way.”

Students are fast approaching one full year of distance learning, yet many are still hopeful for a return to competitive athletic action. SMHS senior Erin Hill was able to complete her junior year for the girls’ volleyball team, but her softball season was paused in March after only a few games. Hill remained philosophical when she heard the latest news.
“It was pretty expected to hear that the sports were being pushed back even further,” she said. “At this point in the pandemic, you have to learn to roll with the punches. Obviously, it is not what anyone wanted to hear, but in the grand scheme of things the priority is to make sure everyone stays safe and healthy.”
Fellow senior Nick Singhal, most valuable player for the Titan varsity football team last season, expressed a similar outlook.
“It is really frustrating that we have to wait longer to play our season,” said Singhal. “In all honesty I think most people saw it coming, but that doesn’t make it any easier. I just hope that we get to play.”
Head football coach Justin Mesa has witnessed almost constant push and pull as his student-athletes alternately prepare for action, only to see the restrictions extended.
“We are definitely disappointed with the recent announcement that the start to the football season and all youth sports competitions have been delayed once again,” said Mesa. “I think the writing was on the wall that a decision like this was going to be made, but it does not eliminate the disappointment we all share. I really feel for all of the kids, especially the seniors, who have continued to prepare with great diligence and intent to be ready to play football in early January, to participate in all sports for that matter.
“However, we cannot sit back and feel bad for ourselves for too long,” Mesa continued. “The season has not been canceled. There remains a season to prepare for and we will do so, as we have been doing since March, with great effort and positivity so that if and when we get the word that we are allowed to play, we are prepared to do so at a high level. This program will continue forward with realistic hope that we will have some resemblance of a season until we are definitively told that is no longer a possibility.”
The San Marino Unified School District closed its doors on March 13 and halted all extracurricular activities to prevent the spread of COVID-19. On July 20, the CIF announced its updated schedule for the 2020-21 school year that retained all previous sports but employs a two-season format. The CIF’s new calendar postponed the beginning of the traditional fall season — Season 1 — with several sports being shuffled between seasons. Winter sports, such as basketball, were woven into the spring season, with regional or state playoffs ending June 19, and those offerings are now designated as Season 2.
“There is no doubt that we have significant challenges ahead of us,” the Southern Section’s Wigod said. “We must try to overcome those challenges with every effort we can make in support of our student-athletes. It is too important to them for us to not do everything we can do on their behalf to keep their dreams alive. Now is not the time to lose hope and I know I can count on you to continue to fight for what we all believe in.”