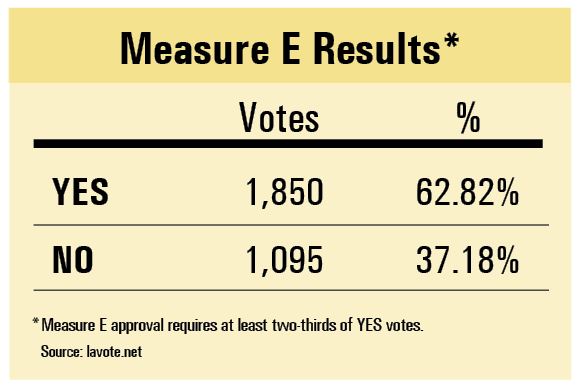 Measure E, the parcel tax that raises $4 million annually for schools within the boundaries of the San Marino Unified School District, had fallen behind the pace needed for victory following an initial ballot count that was taken after polls closed on Tuesday evening at 8 p.m.
At The Tribune’s press deadline, Measure E had received 1,850 yes votes (62.82%) with 1,095 votes in opposition, or 37.18%. The parcel tax required two-thirds approval by the more than 10,400 registered voters who live within the boundaries of the school district to pass.
That tally included all votes that were received by day’s end Tuesday either via mail or in-person drop-off since the election began.
The vote center at Huntington Middle School was open since Feb. 20 and the drop-off facility in front of San Marino City Hall was also functioning throughout the election.
Ballots postmarked on or before Tuesday, March 2, and received at the office of the Los Angeles County Registrar-Recorder’s office by Friday, March 5, will be tabulated and added to the final count.
Should Measure E ultimately fail, it is believed to be the first parcel tax to go down in defeat in the history of the SMUSD.
School board president Shelley Ryan said she remained hopeful for a change in momentum and was also grateful.
“I, first and foremost, want to extend my gratitude to the many voters of the district who agreed to support San Marino’s world-class education, especially during these challenging times.” said Ryan. “On behalf of the Board of Education and our administrators, teachers and staff, I want to thank Jennifer Chuang, Chris Maling, Alan Chen, Beth Davis, Karla Domier, and the many community and student volunteers that worked so hard to support the necessary funding for public schools.”
Measure E raises $968 per parcel, adjusted by the lesser of the Los Angeles Statistical Area Consumer Price Index, or 3%, including commercial properties within the boundaries of the school district.
First approved by voters in 2009 for a six-year term, the parcel tax was renewed in 2015 and is scheduled to expire in June 2021. If Measure E officially passes at this election, taxpayers will be charged in perpetuity, as the six-year sunset clause has been removed from the ballot.
Voters 65 years of age and older can apply for an exemption. Dollars generated by a parcel tax — like Measure E — may only be spent on teachers’ salaries and other expenses. There are approximately 5,400 parcels within the boundaries of the SMUSD with just over 1,000 claiming the senior exemption.
Measure E funds 35 full-time equivalent teaching positions, which will be eliminated if the parcel tax is not passed, according to the SMUSD.
A second school parcel tax — Measure R — is scheduled to sunset in June 2025. First approved by voters in 1991, Measure R generates $1.6 million annually at $366 per parcel and also includes all parcels and commercial properties located within the city of San Marino as well as the boundaries of the SMUSD. Measure R currently carries a six-year term and also requires two-thirds approval by voters.
The lack of a sunset provision on the Measure E parcel tax stirred some opposition in the community. The official ballot statement said that the tax will be assessed in each fiscal year “until ended by voters.”
At its Feb. 9 meeting, the school board proposed and later passed Resolution 13, which earmarks the funding for a potential election to end Measure E in the future. The cost to hold such an election that includes voters within the school district has been estimated at $80,000. The resolution will also create “a trigger mechanism to end Measure E at some future time where the tax is no longer necessary to sustain the district,” which can be enacted by the school board.
The resolution also calls for the board to appoint a task force or oversight committee within 60 days of certification of the election, which will meet at least once a year. It also requires the district to “maintain a reserve account to pay for fees and expenses” associated with an order to hold an election to end Measure E.

DISTRICT CUTS ON THE HORIZON

The outcome of the parcel tax election also made its way onto of the Feb. 23 school board meeting’s agenda as the board discussed the creation of two resolutions that will be further discussed at a special meeting this Friday, March 5, at 4:30 p.m.
There, the board will hold a study session in order to lay the groundwork for the possible elimination of certificated staff services, even if the measure passes. By law, the district must provide layoff notices for the upcoming school year to employees by March 15. The reduction of services will be predicated on enrollment projections through the 2021-22 school year as well as positions that are currently funded by “one-time money,” such as donations that are funneled through the San Marino Schools Foundation. Based on those two factors, the SMUSD is considering the elimination of 8.4 full-time equivalent positions. That number could grow by 33.8 full-time positions to a total of 42.2 if Measure E fails, according to Linda de la Torre, the SMUSD’s assistant superintendent of administrative services.
The proposed staffing cuts will be on the agenda at the special meeting and the board could take official action at its meeting on Tuesday, March 9. The board can rescind any layoff notices that are delivered on March 15 should funding become available.
During open discussion, board member Corey Barberie said “it’s not going to be fun” if Measure E is not approved by voters. “It’s going to be hard decisions,” added Barberie, referencing the $4.2 million of funding that would be lost if Measure E is not successful. “$4.2 million is 10% of the budget and 86% of the budget is spent on staffing. It’s going to affect the classroom.”
At Friday’s special meeting, district staff will make a presentation to the board to provide information and answer questions related to designing a master schedule around staffing ratios, the impact on scheduling specialized course offerings, and other issues in order to create the final list of possible staffing cuts.

Additionally, the board heard a report from Stephen Choi, SMUSD’s chief technology officer who also heads up the district’s COVID response team. Choi announced an agreement with Keck Medicine of USC to administer coronavirus vaccinations to the district’s teachers, staff and administrators.
The agreement — which was brokered by San Marino school board member C. Joseph Chang — will provide the Pfizer vaccination on March 5 and 6, with the second shot available three weeks later.
“This is very, very good news for our district,” said Choi.
Keck is including SMUSD teachers in a program targeting a number of other area school districts, including South Pasadena and La Cañada as well as individual schools and charters in East Los Angeles, Inglewood and Compton. Teachers will get their shots at the Norris Healthcare Center in Boston Heights, in part because of the storage requirements of the vaccine and also in the unlikely event of an adverse medical reaction.
“We have a very robust vaccine operation that we’ve been running for two months, since the vaccine became available,” explained Felipe Osorno, executive administrator of continuum of care at Keck, in a phone interview. “We have given over 30,000 doses, so we have a process that works.
“The equity is extremely important for us,” Osorno added, “and that’s why we’re trying to partner with schools that serve different populations and different socioeconomic statuses so that all kids and teachers can get back to the schools as soon as possible.”
The SMUSD has also set Wednesday, March 10, as a date for students in grades 3-5 to return to Carver and Valentine elementary schools. Lena Richter, the SMUSD’s executive director of educational services, said that results of a commitment survey among parents and guardians of students in those grades will be tabulated this week.