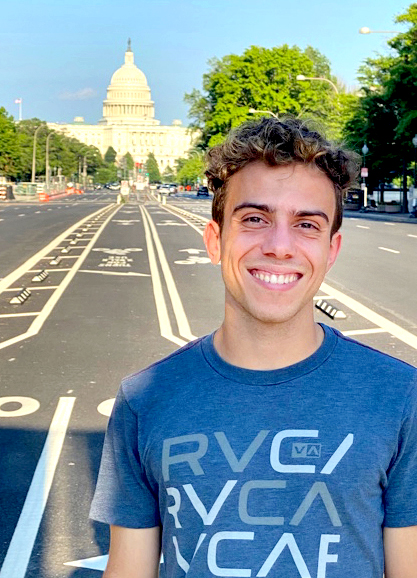 San Marino High School’s Lucas Levy has been able to find several positives even in the blizzard of bad news that has accompanied the COVID-19 pandemic — an ability that could serve the senior well as he leads SMHS’ Associated Student Body in the new school year.
The ASB president for 2021-22 needed to look no further than last spring’s election process for an example.
“We campaigned through social media and a video speech,” said the affable Levy, a seemingly permanent smile splashed across his face. “Voting was conducted online. It was a little detached but much less nerve-wracking, because my campaign speech wasn’t in front of a live audience.”

Levy certainly has leadership experience on his side. He previously served as president of his freshman, sophomore and junior classes. He has also captained his cross country, soccer and track teams. Despite his crowded schedule, Levy managed to phone members of the community and request their support for the Measure E parcel tax, which passed in late June after going down to defeat in March.
The measure’s victory was probably a popular result for his mother, Claudia Cadavid; father, Steve Levy; and siblings, SMHS sophomore Justin, Huntington Middle School 8th-grader Daniela and Carver Elementary School 5th-grader Alexander.
Lucas Levy is savoring the return to campus, though in-person schooling comprises his greatest joy and biggest challenge.

“ASB’s biggest challenge this year will be planning events around the ever-changing COVID restrictions,” said Levy. “But I am confident that with the assistance of my vice president, Karen Huynh; our advisor, Mrs. [Courtney] Rushing; and the entire ASB, we will step up to the challenge. After two years of online school, I want to help re-energize the student body so we can enjoy school activities as they used to be.”

Levy and his ASB mates had virtual meetings over the summer to discuss the upcoming year and recently had a chance to meet in person on campus for their annual retreat.
Rushing is quite familiar with new president’s skill set.
“We could not be happier to have Lucas in this position,” she said. “He is a wonderful leader and role model. Lucas is an excellent listener and cares deeply about all of his ASB members and fellow Titans. Lucas is a fantastic example of leading by example. No task is too much, all students are important to him and giving our Titans a memorable experience is his top priority.”
Though during a recent interview Levy was a few days shy of beginning his senior year in high school, he said he is “narrowing down my schools, but leaning toward the East Coast” for college.
“I’m very interested in government and considering majoring in political science, international relations or some combination of the two,” he said.
He already is more prolific in making friends and influencing people: Levy works part time at a popular ice cream store.
And as for SMHS’ student government, “We’re going to come back stronger than ever,” he declared.