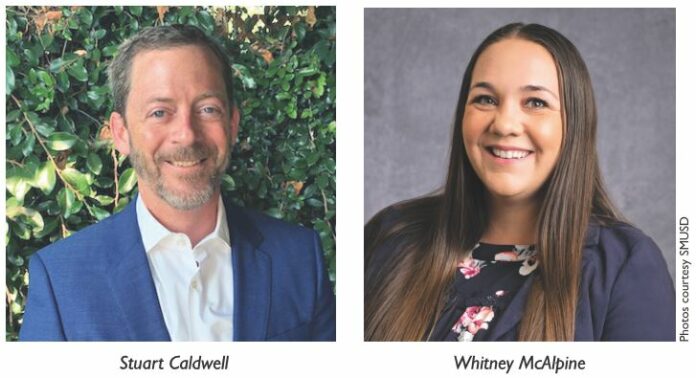 The San Marino Unified School Board last week announced the hiring of Whitney McAlpine and Stuart Caldwell to fill the positions of Alana Fauré and Michael Lin, the current principals of Valentine and Carver Elementary Schools, respectively.

Fauré will retire from Valentine on July 1 after 32 years with the SMUSD, where she worked at three of its four schools.

Lin is moving to the district office, where he will become the chief business official, supporting all four schools starting on June 1.

McAlpine is currently working at the Romoland School District as the TK-5 grade assistant principal of Mesa View Elementary School, where she has been employed in that capacity for the past three years. She has also served as the summer school principal for Boulder Ridge Elementary School.

McAlpine has experience teaching in general education in both primary and upper grades. She has also served in specialized academic instruction accommodating student needs, IEP goals and learning styles for students in K-5 and 8th grades. Between 2012 and 2018, McAlpine served Cucamonga Elementary and the Ontario Center Schools as an SDC Education Specialist. McAlpine earned her bachelor’s degree in liberal studies, her master’s degree in educational leadership and an additional master’s degree in educational administration from the University of La Verne.

McAlpine was selected from a pool of 26 candidates through what superintendent Linda de la Torre called “a rigorous screening and interview process” that included a committee of Valentine Elementary School stakeholders who performed the task of paper screening and a separate committee of Valentine stakeholders who engaged in the oral interview process. Interview panel members selected McAlpine as their top candidate to be interviewed a final time by de la Torre and her executive team.

“I’m thrilled to have the opportunity to join the SMUSD team of professional educators as the next Valentine Elementary School Principal,” McAlpine said. “I hope to continue the work that has been done at Valentine by honoring its traditions of excellence, supporting our amazing teachers and staff and will work hard to continue to provide a student-centered approach that values and grows the whole child — cognitively, socially, emotionally, behaviorally and physically.”

“Mrs. McAlpine’s passion for educational leadership, commitment to a shared vision of comprehensive learning and her experience in building community connections and relationships are all indicative of her ability to be highly successful as Valentine’s next school principal,” said de la Torre.

School Board President Nam Jack said, “Mrs. McAlpine’s passion for ensuring our schools provide the highest quality education to each and every student is evident. Her expertise in instructional leadership and proven success in developing actionable plans to effectively address various academic and social/emotional programs in her previous districts is impressive and exactly what we were looking for in an elementary school principal.”

Caldwell is currently serving the Inglewood Unified School District as the TK-8th grade principal of Woodworth-Monroe School, having worked in that capacity for the past three years.

Additionally, he earned his juris doctorate from Chapman University School of Law.

Caldwell was selected from a pool of 29 candidates, according to de la Torre, in a process that was similar to McAlpine’s. The interview panel seated at Carver selected Caldwell as its final candidate to be interviewed by de la Torre and her executive team.

“I am excited about furthering my career in education as the incoming Carver Elementary School principal,” Caldwell said. “I believe that we are most effective as leaders when we empower and support those that we work with to achieve their utmost and I look forward to working with the faculty, staff, parents and students in that capacity. My role as a leader is to guide, to inspire, to empower and to encourage and foster a school culture of collegiality that is focused on student learning and growth.”

“I’m pleased that our search for a new Carver Elementary School principal led us to Mr. Caldwell,” said de la Torre. “He has the necessary blend of school site leadership experience, education, skills, abilities and interpersonal communication skills to make him highly successful as Carver’s next principal.”

Jack said “We are very excited to welcome Mr. Caldwell as part of District community and specifically our Carver family. We believe that he will be a highly effective leader focusing on the importance of educational growth, with all the necessary skills and abilities to be successful, someone who easily connects with parents, students and staff and is a keen listener and problem solver.”

The district will host a meet-and-greet reception for the new principals on Thursday, May 12. More detailed information will be forthcoming.