Thoughts on Fall, Football and That Dodger Goose 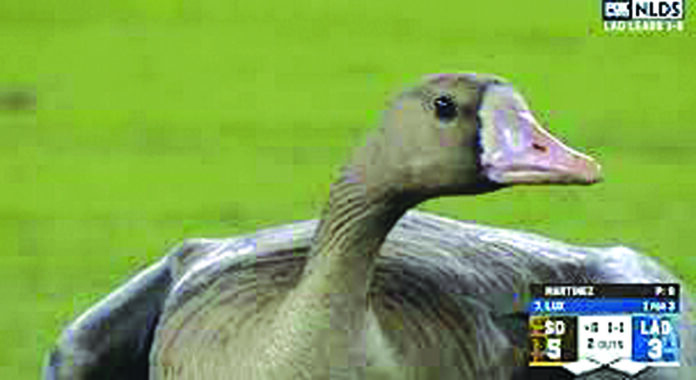 As a longtime columnist for the L.A. Times, one of my most popular features was a column called “Random Thoughts.” Cynics might note that all my thoughts are random. Which is true. In any case, here are a few random observations on October, which flies by quicker than a Dodger goose:
—Best Sunday sound: the murmur of children in church.
—At our house, we don’t celebrate Halloween. We eat it.
—So, which is it: Taffy apple, candy apple or caramel?
—FYI, it’s apple-picking season in rustic Yucaipa, about 90 minutes east.
—While out there, don’t miss the Oak Glen Preserve, a hiker’s paradise.
—Best smell of fall: when a candle singes the side of a pumpkin.
—Best October surprise: rain on the roof.
—BTW, I really hate autoconnect.
—If martinis and red meat are so bad, how come steakhouses are so full of old people?
—“Stopped by the gas station. Choices are regular, plus and Dom Perignon.” — Sam Farmer
—I really miss troubadours. And I wouldn’t mind the occasional chanteuse.
—Science question: Are tacos a solid or a gas?
—Pandora radio find-of-the-week: Lindsey Brier
—“I believe that if you want to see America clearly, don’t read a paper, go to a state fair.” — Garrison Keillor
—It’s not really fall till you can see the referee’s breath on TV.
—It’s not really winter till there’s a snow game.
—Beatles trivia I: “Dear Prudence” was inspired by Mia Farrow’s sister, Prudence.
—Beatles trivia II: “Blackbird” was inspired by Bach’s Bourrée in E Minor.
—You think Cardi B listens to a lot of Bach?
—Sideline reporters aren’t really reporters.
—And NFL analyst Troy Aikman never told me anything I didn’t already know.
—There are no diamonds in the rough. Only my old titlists.
—For the golf or movie buff in your life: “Caddyshack: The Making of a Hollywood Cinderella Story,” by Chris Nashawaty.
—Baseball is the most-haunted sport. Hence, playoffs at Halloween.
—Dear Dodgers. You can buy hitting. But you can’t buy grit.
—Me, I see the post-season failure as karma for the Dodgers’ TV blackout. Is that what cooked their goose?
—Best tacos in Southern California: Yuca’s on Fair Oaks in Pasadena
—Favorite costume for dads. Top Gun
—Favorite costume for moms: The Cloud
—Who took the anchovies out of Caesar salads? And where do I complain?
—Sports producers should find the sideline version of rumpled and animated Steve Kornaki.
—Meanwhile, maybe football teams should stick with one uniform?
—You know, inflation always feels like a scam to me.
—”We are a nation of sheep, and someone else owns the grass.” — George Carlin
—If Medusa had a dating profile: “No creeps. Interest in masonry preferred.”
—Worst thing to happen to Millennials: Slack
—Worst thing to happen to their parents: QR codes in restaurants.
—Love my Trader Joe’s paella. But the shrimp appear to be mating.
—It’s not October till I pick up beer brats at Schreiner’s deli (serving Glendale since 1952).
—Sorry to see Irwindale Raceway go.
—But we’ll always have Glendale.
—I don’t want to live in a world without race tracks, movie theaters or bookstores.
—Miss Al Michaels on “Sunday Night Football.” And so does NBC, the idiot network that forced him out.
—Best bar vibe in the San Fernando Valley: Forman’s Whiskey Tavern in Toluca Lake
—Best dive: Avignone’s in Montrose
—Four magic words: Coconut Curry Pumpkin Soup (on Allrecipes.com)
—Remember, bacon makes everything better. Even Bloody Marys.
—In Oregon, they always drive with their headlights on. They just assume it’s raining.
—Top five all-time sportswriters (as voted by me): Jim Murray, Bernie Lincicome, David Israel, Red Smith, Bill Plaschke, Mike Downey.
—OK, that’s six. Sue me.
—“Arizona is the corner into which America sweeps its dust.” — Bernie Lincicome
—Lesson from the L.A. City Council fiasco: More than anything, our whispers reveal us.
—America still has way too many whispers.
—“Autumn leaves don’t fall, they fly.” — Delia Owens
—“Autumn is everything.” — Robert Browning
For past columns, please go to ChrisErskineLA.com. Email the columnist at Letters@chriserskineLA.com.