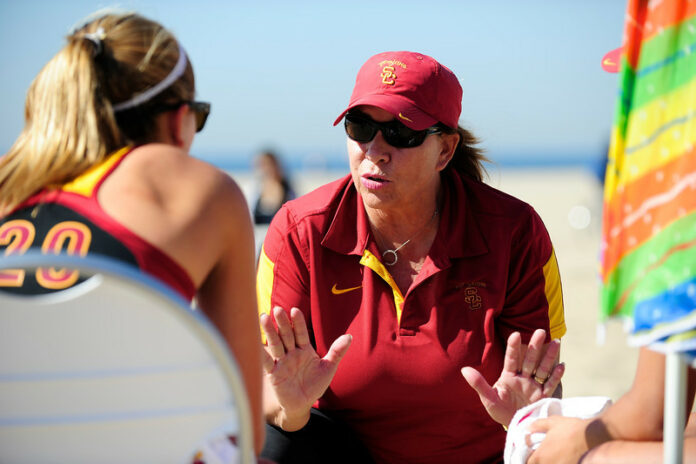 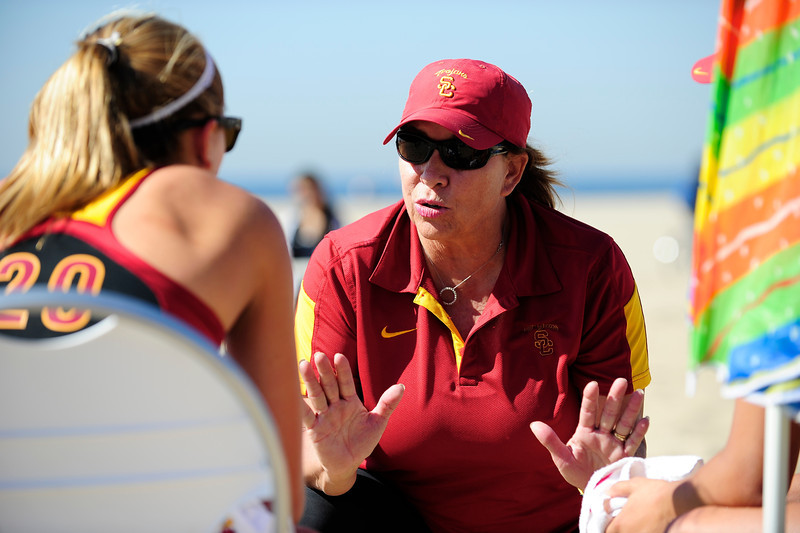 Anna Biller Collier, who coached women’s beach volleyball teams in a pair of Olympics, is in her third season as USC’s first-ever head coach of the women’s sand volleyball team.

Under Collier’s guidance, in 2014, USC posted a 23-3 overall record and spent the second half of the season ranked No. 1 nationally. The Trojans advanced to the semifinals of the AVCA team competition and placed two pairs teams (Burnham/Hughes and Kelly Claes/Alexa Strange) into the AVCA pairs competition.  In 2013 she guided the Women of Troy to a 16-8 record and a third place finish in the team portion of the AVCA Collegiate Sand Volleyball National Championship. The No. 1 team of Kirby Burnham-Stevi Robinson won the AVCA pairs national title and became USC’s first-ever All-Americans in the sport.  She coached USC to a 7-4 record in 2012, the sport’s inaugural season as an NCAA-sponsored “emerging” sport, and sent two USC teams to the pairs championship of the first AVCA pairs tourney (Sara Shaw-Geena Urango and Burnham-Kelly Irvin both advanced to the quarterfinals).  She led two U.S. teams to fifth place finishes at the Olympics: Holly McPeak and Nancy Reno in the 1996 Atlanta Games and Annette Davis and Jenny Johnson in the 2000 Sydney Games.

On top of her duties, Collier is a USAV High Performance coach and a founder member of the USAV Beach Coaching Accreditation Program Cadre.  She has spent the past thirty-two years as a faculty member at Santa Monica Community College, teaching a variety of kinesiology classes. She began as the women’s cross country and track and field coach, winning three California State championships and previously was the chair of the kinesiology and athletics department.

Collier played professionally on the beach for seven seasons between 1978 and 1989, posting 10 Top 10 finishes among her 20 tournament appearances (including a third at the 1979 San Clemente Open and a pair of ninth place finishes at the legendary Manhattan Beach Open in 1987 and 1988).

As Anna Biller, she attended USC where she was on the track and field, volleyball and swimming teams. She was a 2-time All-American in track as a member of the Women of Troy 800-meter (1975) and 400-meter (1977) relay teams, and earned her degree in physical education from USC in 1977.

Susie Rhodes, serving in her second term as Trojan Affiliates president, encourages the community to attend the October meeting to become acquainted with the members of Trojan Affiliates.  The members meet five times a year in the San Gabriel Valley and are educated by various USC professors and other well versed and interesting speakers.  Members also donate their time to raise greatly needed funds for scholarships for worthy USC students. The organization awarded fifteen scholarships for the 2014-2015 academic school year.  Volunteer opportunities include selling USC products, volunteering at the Pasadena Showcase House, USC Day of Service, and more. Of course, the members also participate in a variety of social and cultural events and interface in numerous capacities with the University.

The formal purpose of this alumnae organization is to foster a spirit of friendship, loyalty, and cooperation with the University of Southern California, to develop and sustain a successful fundraising project in order to provide scholarships for USC students and contribute to the advancement of education.

For further information regarding USC Trojan Affiliates and/or to make a reservation for their October 2nd  meeting at $25 per person, please contact Sarah Sismondo at (626) 303-7284 or sisarah@verizon.net