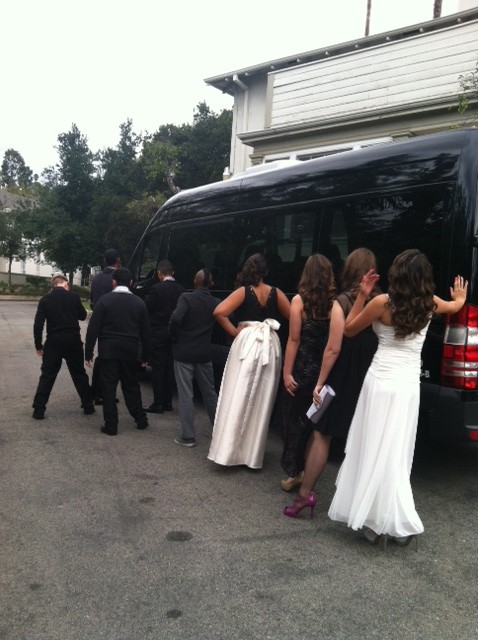 Teens living at Hillsides teen satellite homes won two awards during the fifth annual “Movies By Kids, For Kids” Film Festival held in November  at the Writer’s Guild Theater in Beverly Hills. One resident won the award for the best supporting actress in a short film entitled “The Reckless Phase.”  Another group of Hillsides actors won the best ensemble award for the film “The Bully.”

Winning the awards was the icing on the cake of an exciting months-long project during which 10 Hillsides teens wrote, casted, and acted in three short films courtesy of a non-profit organization, Kids In The Spotlight, Inc (KITS). KITS trains youth in foster care programs to express themselves through filmmaking and encourages an interest in careers in the movie industry. The filmmaking experience culminates with a yearly film festival.

“The Reckless Phase” told the story of how a girl’s dream of graduating from high school turned into her worst nightmare. “The Bully” dealt with the theme:  “Even bullies have a heart.  Or do they?” The third Hillsides film was “The Beauty Project,” in which a girl comes to accept her inner worth.

The Hillsides teens began working on their scripts last spring.  KITS provided them with a five-week screenwriting workshop taught by industry professionals followed by a five-week casting/acting workshop. Next, professional directors and camera crews spent a day on Hillsides Pasadena campus filming.

In the days leading up to the film festival, the teens were fitted with donated gowns and suits. The day of the big event, they had their hair and make-up professionally done and rode in style to Beverly Hills in a limo before walking the red carpet and watching their films in front of a packed audience. Hosting the event was Ty Burrell, who plays the father Phil Dunphy on the hit comedy show Modern Family.

“I was so impressed by the collaborative work of the children during the entire process,” said Ramona McGee, Hillsides director of group homes, who oversaw the project with the help of other staff members. “They were very supportive of each other, boosting each other up when needed it.”

The experience also had a profound effect on the youth that will last long after the applause has ended. The subject material for their films was based on personal experiences, such as being bullied or the death of a sibling. These films touched on their trauma, said McGee. “This is empowering for them, and gives them a sense of control instead of feeling so out of control.”

The teens living in Hillsides satellite homes either cannot live at home, have suffered trauma, or face emotional or behavioral challenges. The satellite homes provide them with a safe and stable environment where they can thrive.

Hillsides was one of two local agencies that participated in the KITS Film Festival. The other was Maryvale, located in Rosemead, CA, which provides residential treatment for girls in the foster care system.